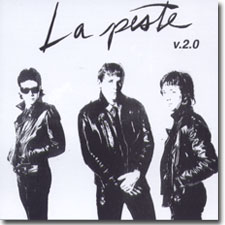 In1979, Boston punk power trio La peste disbanded. No big messy break up. No fighting. Simply the perceived leader, Peter Dayton (singer, songwriter, guitarist) confirmed rumors that he was going solo. Dayton formed La peste with rooming house mates Roger Tripp (drummer) and Mark Karl/Andreasson (bass player). None of the guys knew how to play any instruments. From their inception, La peste became staple players in the fertile and rapidly growing Boston rock scene. As that scene grabbed national and international attention as a nexus for great American punk, La peste's arc was on the rise. Tightening their sound what they came up with was inventive, not derivative. Citing influences like The Beatles, Bowie, Roxy Music and Aerosmith they had a timely sound. The characteristics that gave La peste its own branch in Boston rock's family tree was their approachable angst mixed with dark subjects, existential ironies combined with quick-chopping, pop/punk nerve. They were not snarling, sneering and snooty but rocking and inviting. You didn't need a Mohawk to rock. Just money for admission and a love for smart lyrics and a reverence for pop's past and punk's present.

One of the greatest punk songs EVER is a La Peste song, Better Off Dead. Before Burma was reaching for their revolvers La peste were positioning themselves in a national underground consciousness. Dedicated and hard working they strived to breakout and garner large-scale musical reach. Boston rock-lore abounds with rumors of U2 being signed to a major label at the expense of La peste. Would La peste have turned out to be as big as U2? Doubtful. Perhaps they could have risen from minor acclaim to a more known and influential status. Could the stress of their striving for great recognition lead to the split? Could this band survive the split?

La peste v.2.0 is music cobbled from the remaining parts of the break-up. After Peter Dayton left guitarist Ian Kalinosky was added to the band's line up. Once thought to have been lost, the tapes that comprise this release of demo recordings are from 1980. They capture the live, raw presence of the post-Dayton reconstruction. These songs never made it to anything more than local Boston compilations (Modern Methods-Wicked Good Time series). Graphically this release is not garnished. Just a simple straight delivery, sans-hype. The tracks are put together in bare-boned, black and white package, limited liner notes and the music. Is version 2.0 retooled with the bugs worked out to create a new and improved version of 1.0?

Takaido Radio is the opening song by Mark Karl/Andreasson wrote a song envisioning himself as a street fighting samurai staving off real Japanese samurais. With a metal-ish and anthemic start of hard chords and thunder roll drums it has blazing guitar solo attacks. It is easy to hear the early influence but with a harder and more rock based sound. The vocals are off and hard on the ear but accompanied by a raw and unadorned sound. It is still hard to believe that this is just a trio. A powerful trio.

Lease on Life is the second track and it is a killer. Along with many other emerging Boston rockers of the time, this one was in heavy rotation on BostonUs college radio stations, as well as, 50,000 watt commercial stations. Back in the day, I had no idea that the band had broken up and this was a new La peste. I thought it was the same band with an expanded sound. Razor rockin' and new wave tainted. Guitar slices into a fast, jerking nerve-laden onslaught. Primal drums about-face to a driving force. The music sounds sarcastic, bored, on-edge and guttural. The opening lyrics are some of my favorite of all Boston bands,

Mother seems so bored now.
She has a brand new laissez-faire.
She keeps telling me about detente.
And I am telling you. I don't care.

With my own self-perceived Stones, Mother's Little Helper, updated referencing and seemingly political stance, the song is saturated in the attitude of the time. Ennui and apathy are interlaced with exuberant and youthful confusion. It seems like the new lease on life is that Mommy wants to be a commie. Wishing for her hands to be tied because the choices and variety of American society leave her bored and looking for the discipline of the state. Unequivocally, this is a Boston rock classic that rivals the early La peste classic, Better Off Dead. I think that it is a better song. The attitude is more direct than campy. It is beyond boyish sexual pursuits. This is about manifesto and the future. Better Off Dead has the hooks but Lease on Life is smart and contains something that all great songs of this era contain, benign power oozing from ambiguous lyrics leaving the listener to create their own vision of what this all really means. Thinking peoples rock that is far under-known and deserving of another listen and a second thought.

The remaining songs don't rise to the heights of Lease on Life. These songs are political and questioning 80's society. It is socialist rock. Moscow Radio mines the same communist ore and aura as Lease on Life. Only One Gun taps into gun control. Sixteen Cities embraces futuristic urban life and the threat of war. Cities are countries with bombs pointed at each other. Army of Apathy revisits war, pollution, revolution. My Eyes expresses disgust with society. The theme of the times was a liberalism adopting a fascist armed forces determination. Looking back the stances seem contrived. These were popular themes of the era but it gets to be tiresome and pandering. I am not convinced that it is more passion than just posture.

Tripp and Karl also had a hand in making the La peste's earlier music so it is not a surprise that the original La peste sound pops back in the v.2.0 tracks. Acid Test, Odd Man, and Crisis all have moments that sound like they are lifting from their past material. None of the influenced songs achieve the same intensity and allure as their previous work. Without Peter Dayton's vocals these songs seem spare and pale in comparison. They are not bad songs. They just make you want to hear the early material when the sound was tight and was consistently impressive.

As a re-release, this is a chance to rehear the influential v.2.0 moments and reinvigorate musicians and rock historians, alike. The sounds here are great. The live/demo recording quality works. You can hear how good their live performances and presence was. There are so many influences I hear swimming in the recordings. From the Boston sound, The Neighborhoods, The Rings, The Atlantics, Burma, Unnatural Axes (Tripp's "other" band), November Group, The Real Kids, Pastiche. Beyond Boston I hear Agent Orange, Gang of Four, Killing Joke. These are great moments caught on tape. There is real work and thought in the construction of these songs. But in the words of Mark Karl, "If I listen to an album I get tired of it after a few songs. I just don't listen to that much music at all". Karl's own description describes version 2.0's affliction. I am tired after 5 songs. Beyond the moments and great sounds being created I lose interest. La peste v.1.0, I have listened to over a hundred times. I can't say I would do the same with v.2.0's re-release. OK, Lease on Life, I could listen to for another 25 years.