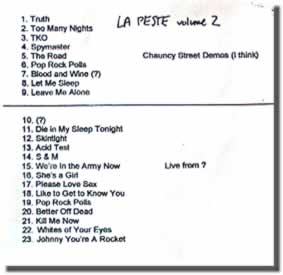 This week I am reviewing the second of three CDRs compiled by Jordan Kratz (of the current punk band Big Meat Hammer), who recorded La Peste in 1978 with a 4 Track in their Chauncy Street Boston loft space in a few sessions, and live at Cantones and The Space.

The 3 CDs have all his best La Peste recordings and the Euphoria Studio demos, The Better Off Dead 7', and the Northern Studios Demos. The recordings were done with a TEAC 4 Track and a TASCAM Mixer.The overdubs if any were done in his apartment in Marblehead. Most of the live stuff was done at The Space in early 1979.

Last week in the gullbuy Andrew reviewed The Wipers box set. I hadn't realized that the first Wipers single was also called 'Better Off Dead.' If you have never heard La Peste and are wondering what they are about, they are a Boston punk band that are similar to The Wipers in many ways. Both bands were trios, both rocked in a no nonsense way, and both had great frontmen. ...and they both had a debut single called Better Off Dead!

Volume 2 in the set starts off with nine songs from the Chauncy Street demos. There are excellent versions of Truth, Total Knock Out (TKO), Spymaster, and Blood and Wine.

Truth is a great song with a Pinocchio/lying theme to it. Like the best La Peste songs, it has energy, tune, and lyrics that bring you back again and again.

A generous person could say that La Peste predated Nirvana's soft/loud big melodic chorus sound by twenty years. TKO is the song I would point you to as illustration of this example. Do you remember Mad Magazine's cartoon Spy vs. Spy? The La Peste song Spymaster always makes me think of that cartoon. Spymaster is one of the finest La Peste songs. If it had been given a studio treatment and released as a single it would have equaled Better Off Dead as a bona-fide first wave punk classic. Blood and Wine is a special treat to me, as it is a great studio version of a little known La Peste song. It has religious imagery, and an almost psychedelic sound to it, plus duel lead vocals - a rare thing in La Peste.

Last week I tried to give a historic perspective for La Peste. I compared their sound to several of the UK punk bands. I did not give any concentration to Mark's bass sound. I as a bass player myself, and have always loved Mark's simple but razor precise style. He played bass like Captain Sensible did in the Damned song Neat Neat Neat. You can hear the band at their very best in the live version of Kill Me Now. The recording must have been close to the end of a set, because the band is hyper and not tentative at all. The version is blistering, and the song is one of my faves from the band. Also outstanding on the live portion of this disc is the version of Skintight. Skintight became the main song on Peter Dayton's solo 12inch. Acid Test is a really fine La Peste song, and the version on this disc does it full justice.

The songs I mentioned are my faves from Volume 2. Some of the studio songs suffer the plague many bands suffer in the studio. Bass too loud (ruins the Chauncy St demo version of Let Me Sleep), or vocals off. Many bands were not used to singing without their guitar in hand and live music blasting around them from their bandmates. When they entered the studio and sang their track alone with headphones on they no longer have to mega-project to be heard, and their vocal loses the sound fans love. The studio version of Let Me Sleep suffers from this fault.

In the live set, Like To Get To Know You sounds half baked and tentative, like they were trying out a new song that they were not fully sure about. These small points aside, I am SO GLAD that Jordan has made these recording available to me, and to the Italian label Rave Up, which will be releasing a double LP from these recordings in the near future. La Peste will be heard, as they should be.