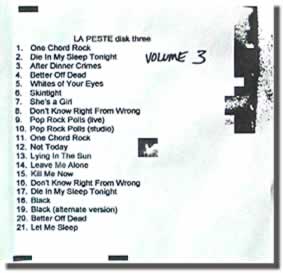 This week I am reviewing the final of three volumes of La Peste material given to me by a fan who maintained archives of sessions he recorded for the band in 1978 and 79.

Jordan Kratz played in The Transplants, and recorded La Peste, Unnatural Axe, Thrills and others back in the 1979 Boston punk scene. He is still active in the music community with his current band Big Meat Hammer.

Working with Mark Andreasson, Jordan helped bring about the release of some of these songs by bringing them to the attention of Italy's Rave Up Records, a label that has re-released many classic Boston punk records, including Jordan's own band The Transplants. Rave Up will be releasing a double LP culled from these discs in 2003.

Volume 3 has studio and live tracks without the block formatting the other 2 discs had. There is a studio track here, a live track there, a scratchy recording of the Better Off Dead single somewhere else.

Initially this was my least fave of the three discs, but as I listened, there were five songs which are special, in my opinion. The first of these is After Dinner Crimes. I don't know of any studio version of this song, and the recording here is live in the worst way (big sound with lots of reverb), but it is a passable recording of a really great La Peste song. I wrote it down as a favorite on this disc, then scratched it off the list as I listened again and hated the sound, then ended up putting back on my faves list as the song went through my head for days.

The studio version of Whites of Your Eyes is a really clean studio recording of a great La Peste song with lots of background vocals. Peter Dayton sings his lyrics about scenesters going out on a limb with cocaine and excessive lives.

The studio version of Don't Know Right From Wrong is a classic that has made the rounds amongst La Peste collectors on cassette for ages. It has keyboards on it in an almost Joy Division-esque way. The song itself is one of the cornerstones of La Peste's legacy - a classic you will love.

Following a recording of the B-side of La Peste's only proper release (a 7inch: Better Off Dead b-w Black) is an alternate studio recording of Black. This is a real find for a La Peste fan! The feel of this alternate version is even more muted than the original (which was the quietest of La Peste songs to begin with). The alternate version of Black gets into some heavy echo dub action, similar to what Generation X did on the B-side of their Wild Youth 7inch. There are claps like you would hear in a Stooges songs, and some funky solo guitar. La Peste is packing a punch on this never heard gem.

The last of my faves on this CDR is the final song, a studio version of Let Me Sleep. It is a song about wanting to stay in bed on a weekday morning, and having your girlfriend (or boyfriend, as it might be) waking you, telling you that you have to leave for work.

These three CDs that I have covered in the last 3 gullbuys are special for fans of La Peste, and serve as a forecast for future releases with strong material that may appear in days to come. I am glad for them.

All of these recordings cover the first incarnation of La Peste. The band went on after Peter Dayton left and created many new songs with Ian Stevens as the guitarist/vocalist. Billy Bacon also occasionally would contribute keyboards.

This period is best chronicled on a bootleg LP which was released at the time. It was a pressing of a session the band recorded live at Emerson College's radio station WERS. Although the LP sleeve echoed the graphics of the Better Off Dead single and credited Peter Dayton as the front man, the band had nothing to do with the record and Ian Stevens is the guitarist/vocalist on these recordings.

I hope that one day the LP gets a proper release as well. You can hear two well produced studio recordings of the Ian Stevens period of the band on the 1981 'A Wicked Good Time' compilation on Modern Method Records. Army Of Apathy and Lease On Life are the two tracks on A Wicked Good Time. They are great songs that show that La Peste Mk. 2 was as dynamic as the original Peter Dayton fronted band.

As any fan of La Peste would do, I dedicate the last three weeks of La Peste reviews to the memory of Roger Tripp, the drummer of La Peste. In 1994 he was killed in a car crash while driving home from work, the tragic victim of a drunk driver. He had achieved a happy life and had so much ahead of him. He left behind a wife and a family, and left us with memories of his happy go lucky ways and incredible lust for life.