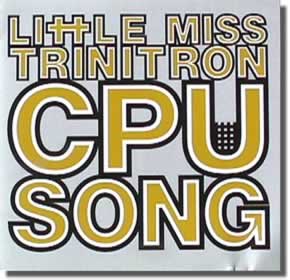 Originally, Little Miss Trinitron was featured here in the Gullbuy on a remix on the Mum & Dad Kiss Of Death EP on Twisted Nerve.

Finally Little Miss Trinitron has gotten around to releasing a 3 inch cd (and I'm guessing a 7 inch version exists too) with two songs with a playful electronic sound which recalls the dawn of the 70s computer age.

Little Miss Trinitron is from Manchester and is actually a guy named Stuart. He's been bouncing around for awhile doing remixes and now has this single released. It's an odd bird too.

CPU Song has a two- note rising melody, a boo-bippity drum machine rhythm, along with a computerized voice which is buried in the rhythm at just the right depth. There are sprinkles of sound effects which remind me of early 80s computer's turning on and off, and eventually some bird-calling sounds too. On top is various keyboards solo-ing as the song saunters along.

The second track is a completely faithful and tongue-in-cheek instrumental cover version of The Eagles' Hotel California with a reggae dub meets moog synthesizer and Wendy Carlos feel. It's sort of a cross (idea-wise) between the cheesey lounge covers from the 60s updated with a Commodore 64 computer.

My favorite bit is the cat meow sample thrown in to the mix - and the witches laugh - it's than you know that this is all for fun. The synth imitating the fading guitar solo with the mechanical drum fills at the end are a lot of fun also.