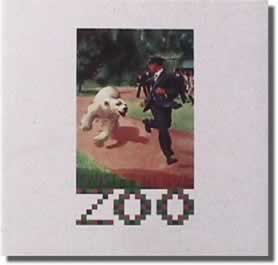 Twisted Nerve have created their own animal kingdom with this compilation. It's hard to tell if the tracks here are exclusive or previously released. I think it's a bit of both, but I could be wrong. The sounds make for some interesting imagery.

Andy Votel starts things off with Polar Bear Attack. It begins with a hurdy gurdy carnival organ and squealing kids. Then the grunt of a polar bear scares everyone at the zoo, monkeys scream and the kids disperse. This is all on a bed of programmed synths and an elephant like trumpet sound. It's funny and short enough, just under 2 minutes.

Little Miss Trinitron adds chirping and insect background noises to Birds of Canada. It sounds more like a field recording in the tropics than north of the border. The percussive electronics circle around bird like sounds and go back to the rhythmic swing. Ringing sounds then get intersperspersed with Tubeway Army like keyboards and they finish up with more bird and bug noises.

Horse is one of two very brief (8 seconds) of animal (horse) sounds, taken from a sound effects record.

DOT Horses is the first organic track here. The accoustic guitar reminds me of the old folk song sound of XTC's 'Love on a Farmboy's Wages.' I like the warm bass and touch of the brush drums. The doubled over vocals also work well here '..if you are undone then forever after..'

The Insect, which is Ian and Joe from Mum and Dad take us to their Tropical Insect House. They pulled out lots of noisy chirping and high pitched buzzing bug sounds from their their synthesizers. They let the bugs take over for a bit and lay down some ominous sounding tones that pace around waiting for the bugs to hibernate.

Andy Votel and Dave Tyack indeed go Ape Sh*t here. They provided or found the grunting and screaming ape sounds. A drum beats wildly behind them, at times slowing down getting more rhythmic then speeding up as the ape noises get louder. This is funny and strange and best of all, brief.

Misty Dixon covers (of all people) Dolly Parton's Love Is Like A butterfly. I like the churning bright guitar and organ and her sweet harmonies. It almost has the feel of a classic C86 song and there's nothing wrong with that. I have no idea what the original sounds like. It's always a good thing when a cover version gets a new owner.

Badly Drawn Boy Push Me/Pull Me starts out with a Chewbaca like growl, maintaining the animal theme, that gives way to a rainmaker that almost sounds like fake applause. Some deep tuba and an elephant like trombone come crashing in to this extended start. He comes in '..what's the matter you hey!..' and after the first verse, there's a sample of people laughing over more horn antics. I like the lead into the chorus '..chasing your tail will tear you apart..I won't let you down we share a heart..' I think this is an exclusive track, which will probably be the major selling point of this compilation.

Sirconical weigh in with Sloth, which features plucked guitars under programmed synths with some fast drumming. It all keeps going as some strange synthesized creature sounds come along for the ride.

Dave Tyack goes it alone on I Love Being a Turtle (The Turtle Said) with his programmed synths and drums. He loops in a lilting guitar with synth strings and horns and a plinking electric piano. It seems like an incomplete thought because as it fades, you get the feeling there was more to this.

Mariano starts out Batman Revisited with an accoustic Batman intro before his breathy Italo-anglo nasal accent and too close to the mike singing make their entrance. His broken English makes this song almost too revealing '..I wanted to be Batman but I wasn't stinking rich..'

He adds even more to the mix with harmonica and drums played with mallets for a mini oceanic symphony.

Cherrystones Va Moose! has stop start synth loops bird sounds. The fuzzy guitar and bass give way to a more Oriental sound loop that goes back to the fuzzy riffs in a rhytmic pattern with a duck caller quacking away for good measure.

Dave Tyack comes back on his own for Penguin Parade. This track features the sounds of water running over rocks as programmed drums sputter in the background. It is animal free and less than 2 minutes long.

Supreme Vagabond Craftsman close out this compilation with A L F is Gonna Rock You. The synths here sound like car horns as driving guitar and trumpet come in. The singing echoes but it's barely audible. I'm not sure why they buried the vocals and it trails off which makes me think there was more to this, but we'll have to settle for an incomplete non ending.