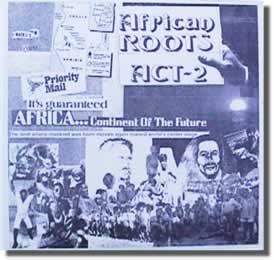 Wackies Music is a German label that has been putting out reissues of 1980-1982 NYC dub records by Lloyd Barnes a.k.a. Bullwackie, who 'left Jamaica in the wake of the gang warfare and established a studio in the north Bronx where for years he has fostered the budding stars of reggae.'

Bullwackie produced many reggae performers in the Bronx. Artists such as Horace Andy, Wayne Jarrett, Junior Delgado, Naggo Morris, and the Love Joys were among these. African Roots Act 2 is part of a series (Act 3 is the latest) of dub versions Bullwackie made in 1982 from some of the records he recorded.

The 10 tracks have smooth production and lots of the echo and reverb we all love dub for. Lonly Dub is a version of Horace Andy's 'Lonely Woman.' The version starts with a line from the song before it becomes completely instrumental.

Other tracks on this CD are dubs of songs by Max Romeo, Barrington Spence and Junior Delahaye. Junior Delahaye contributed keyboards, drums/drum machine, and mixing skills. Leroy Sibbles made these dubs as heavy as they are with his bass.

Journey Rock reminds me of the Serge Gainsbourg song 'Lola Rastaquourere' (from the reggae album 'Aux Armes Et Caetera' he did with Sly and Robbie in 1979).

I have listened to African Roots Act 2 many times. While none of the songs are knock out and grab you great, I enjoy them all in the way they were meant to: just for the joy of it. In my opinion the best dubs on this disc are African Roots Act II Dub, Revelation in Dub, LAM's International Dub, and Lonly Dub.

If you like loud fat bass holding down tight drums, keyboard flourishes and lots of staccato guitar, you won't feel sad if you lay down the bucks for this CD.