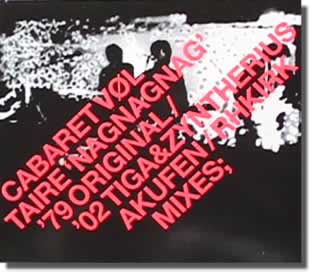 Cabaret Voltaire virtually invented the electroclash sound with songs like Nag Nag Nag when it was originally released in 1979, so it only seems fitting that some 20-plus years after it's initial release, that it is reissued, along with 3 modern remixes by Richard H Kirk (himself a member of Cabaret Voltaire), Tiga & Zyntherius and Akufen.

This re-release is supposed to be a taster for the forthcoming release the Original Sound of Sheffield - 78/82 - Best Of Cabaret Voltaire. Conform to Deform '82/'90 - Archive was added in a previous gullbuy and is a 12 inch remix collection.

Starting the single with the original version of Nag Nag Nag, a groundbreaking single released in 1979 on Rough Trade (and also available on The Living Legends cd from 1990) which was produced by Rough Trade head Geoff Travis and Red Krayola bandleader Mayo Thompson.

From the beginning sounds of feedback waves, the muffled raunchy treated guitar sound, and the distorted electronics - even before you hear the vocals you know you are in for a treat. I think a drum machine fill has never sounded more sinister. That budda budda budda sound, coupled with the modulated feedback, along with various tv samples interspersed all lead into the male electropunk vocals. The chorus with two voices squelches and is echoed through different types of distortions proclaiming 'Nag Nag Nag' at intervals.

The first mix is by Tiga & Zyntherius, and no surprises, they have made Nag Nag Nag ready for the dancefloors. What makes this mix interesting is the fact that Tiga added his own vocal rather than keep with the original vocals, and I think seeing the end result as it is, that was a good idea. It creates a completely different song with more of a pop vocal style than the original industrial mix.

The second mix is the R. H. Kirk #4 Remix, and it keeps in line with the original much more. What makes this mix exciting is R. H. Kirk has come up with a new rhythm and new modulated sounds which still sound old school (read: cool) so the end result is still retro and new at the same time. The song has lost most of the vocals, the chorus vocals coming in around the 2 minute mark, which gives this mix a dub feel. This is definitely a good way to make the song current, though more lead vocals might have been nice. The ending has an incredible buildup which makes up for it.

The third and final mix is the Akufen's Karaoke Slam Mix, and if you know Akufen, you know they are all about the broken rhythms of house, an interesting combination when they are on their own, and when remixing Nag Nag Nag, it still works great.

Things don't seem too strange until almost 2 minutes in when all sorts of samples are glitched into the mix - all the while the Nag Nag Nag vocal is sampled in at appropriate times.

There's also a computerized voice (the only thing which might irk some people I think who are not into that sound) to keep things steady - until around 3 minutes and the rhythms get very interesting and on their own only to glitch out of control. I'm not sure how Akufen does it, but he definitely has something going on I like.