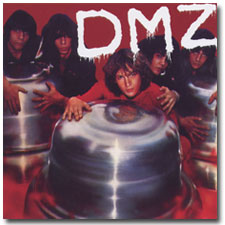 DMZ were Jeff 'Monoman' Conolly's band before The Lyres. They are a solid part of punk rock history, and one of the first pack of bands signed by Sire records, the label which became synonymous with NY punk.

Problem was, DMZ were not from NY, and their record was released with a lousy mix and a bad sleeve - no one bought it.

'DMZ' was produced by Flo & Eddie (which is great) but was recorded in Syosset, Long Island NY (which wasn't). The drummer broke his hand while recording one of the finest moments on the disc (Cinderella). DMZ got dealt fewer and fewer cards as flashier bands came into the scene, eventually losing their guitar player prior to breaking up.

DMZ differed from other punk bands by their love of freakbeat, Northwest garage bands like The Sonics and The Troggs, and Jeff Conolly's organ.

All the songs are Jeff Conolly originals except a Troggs cover and a Wailers cover.

This record is a burner, and came as a pleasant surprise to me, having only heard their Bomp EP back in the day when it first came out.