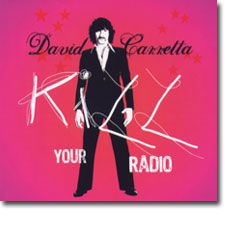 It was 5 long years between David Carretta's first album, Le Catalogue Electronique released on International Deejay Gigolo Records in 1999, and the release of his second album Kill Your Radio in late 2004. A lot has happened in that time in the electronic music world, but luckily David Carretta has remained one of the consistent and reliable artists out there.

David Carretta has been busy these past few years releasing 12 inch singles, running his own label called Space Factory and doing remixes for others. There was

If you liked his first album Le Catalogue Electronique, there's not much doubt you will also like Kill Your Radio - and maybe, like me, you might like it even more than his debut. While Carretta hasn't changed his approach to music much, which includes killer hard synth lines and often mutated vocals, Kill Your Radio feels like it has kicked it up a notch from the simpler days of Le Catalogue Electronique and the late 90s.

The album is bookended by Hertz Anthem, a 2 minute Kraftwerkian introduction - and The Rebirth a 3 minute outro which could off of the Dopplereffekt Linear Accelerator album if it only went for a little longer.

The second track is the lead-off single, Lovely Toy which sets the mood for the album with its lyrics "You my lovely toy, I am your lovely boy" set to music that sounds like if early Ministry and New Order worked together.

Following this, is Te Quiero Me Amor, which oddly, is sung in Spanish. A rolling hard synth accents this sadistic track with hushed evil Cabaret Voltaire styled vocals. The rattle snake rhythm snakes its way throughout the track and reminds me of Hell's My Life is Hell from the Geteert & Gefedert album.

The track Colors originally appeared as the b-side to the Lovely Toy single - here it is a minimally inspired track (perhaps because here it's the Transmition Mix), which mixes a PWOG buildup and a vocal used rhythmically, like the meeting of Serge Gainsbourg and the 80's band Yello. The disembodied vocals seem a little out of place; I'd be curious to hear this track extended out for 10 or 12 minutes as an instrumental.

Homep has a Monster Truck Driver type sound like every album seems to have nowadays.

Ta Liberté C'est Ca is a pummeling track with buried monotonous vocals which could definitely drive some mad. It seems to end 5 minutes into it, only to do a Tangerine Dream thing for the last two minutes for a nice twist.

The title track Kill Your Radio ups the disco funk quotient, while David sings about killing your radio.

Extreme Body has waves of synths and a hard beat that lead into a fiery track with a Tones On Tail Go! vocal (this time saying "Yes!").

Vicious Game (the Radio Edit) gives Benny Benassi a run for his money, and shows Carretta's true colors in the manipulated French vocals.

David Carretta in the gullbuy: