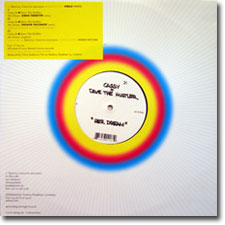 Her Dream is a single from the Mental Groove compilation Where Is Here. This is the same comp that originally presented the Miss Kittin & The Hacker song The Beach.

Cassy has made appearances on other artists' records, singing on Alpine Rocket for Luciano on the Perlon label, and Tu Es for David Carretta on the Nighteffect 2 compilation for WMF Recs.

There are two remixes on the 12inch as well. David Carretta adds his trademark Giorgio Moroder synth sound and spreads out the length of the track to use up the whole A side.

Patrick Pulsinger makes the track odd and fun by adding instruments including a piano melody (played by Philip Quehenberger) , moving the bass way back in the mix, and throwing in electronic sounds here and there. He moves stuff around during the mix, so there is no repetition, even though the riff is repetitive by its very nature. I especially like the weird treated drum breaks, which sound like they are played on an 80s electronic Linn Drum.

The original mix is a well produced half downtempo, half Gary Glitter sounding electronic vocal track. After the two fancy remixes, the original version sure sounds stripped down. It is like listening to Spektrum after digging on one of the the Tiefschwartz remixes of the band. There is distorted guitar part in the track that drives the mania level way higher, which Cassy works off with her vocal. Her Dream is a slow burner that builds up pretty well.