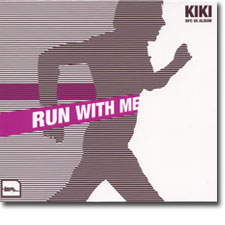 Kiki is a Finnish artist who has released a number of 12 inch singles on the Bpitch Control label, as well as over the years appearing on numerous compilations like Ivan Smagghe presents Death Disco, City Rockers Present Futurism 2, Rebel Futurism: Session One (with Silversurfer), Neo.Pop.03 (where he mixes in well with the likes of Northern Lite's Reach The Sun), the Hang All DJ's Volume 2 by Soulwax, and the Berlin 2001 Compilation. Kiki should not be confused with the French artist Kiko, whom we also have reviewed here before.

Kiki steps it up a notch with his first full length album and for the most part pulls it off with an addictive cd full of variety. There are a handful of tracks which stand out as vocal tracks which will no doubt become singles. The End of the World, the first track on the disc in fact has been released as a single. These vocal tracks tend to have simplistic lyrics and catchy grooves with a mix of goth and electro. But it's on the darker and deeper instrumentals like The Big Picture and On the 104th Day where I feel Kiki allows himself to dig into his arsenal of addictive synth elements. Even songs like the sweeter Intimacy works quite well when it mixes sweet synths and dark pulsing Moroder-like rhythms. There's only a few side steps when Kiki sets forth the more generic and more passive slaps like on Classix Nouveaux which has Kiki sounding more French than Finnish. Oddly one of the more commercial sounding vocal tracks is kept as the second to last tune called Turn the Lights Down - which again could've used some more interesting lyrics. Kiki is at his addictive best when he combines the goth, the electro and the orchestral string for a disco tech blur like he does on the final track Luv Sikk Again where he revisits the Luv Sikk theme.