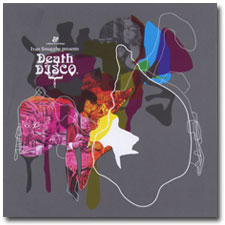 Eskimo has put out great compilations mixed by Glimmer Twins. Some say that Soulwax picked up a few tricks from the Eskimo comps.

Ivan Smagghe has laid some monsters on us with the Me & Madonna and Innerstrings singles, and the 'Hard' compilation.

'Ivan Smagghe presents Death Disco' is not an 80s comp or a disco comp - it is just the name he chose for this collection. Some of the stuff is a bit old, some is new, but none were chosen for that - everything was chosen as pieces in a puzzle put together just for Eskimo.

Most of the tracks are vocal pieces. I only knew 2 of them before. Kiki Luv Sikk was a strong 12inch on Bpitch Control. I always confuse Luv Sikk with a Savas Pascadilis track. The Chicken Lips remix of We Don't Play Guitars was a real treat on the COS 12inch it came from. Both tracks are welcome on this record too.

I really love the opening track Way Out. It reminds me a little of the Martin Atkins project Brian Brain from the 80s. Martin Atkins was the drummer of PIL. If you listen parts of the music sound very much like Autobahn by Kraftwerk. This is a legit krautrock track from the past, so maybe it was parallel evolution.

I also like the sixth track TV Night . I was all over the Planet Claire connection before I read it in Ivan's liner notes (reprinted with the track listing), but I don't just like the cut for using that riff. It has this super solid beat and lots of ideas in it.

Stop is my favorite instrumental on the disc (though all are good!). I too like italo disco, and don't even mind the cheesy parts which were removed for this one. I guess it is an artifact of my hair metal days...

Finally, the killer closing track Breakout which is the one I would play for anyone I wanted to turn this disc onto. It reminds me of the London band Spektrum, and (like them) is ace as spades!

I'd say but it folks.

Ivan Smagghe in the gullbuy: