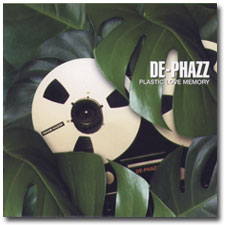 Music by De-Phazz has been hard to come by in the US, past cds only getting the import treatment on labels like Mole Listening Pearls, Edel Records, and Universal Jazz, all labels out of Germany, the home-base for Pit Baumgartner and friends.

It's somewhat of a reissue of that compilation with a re-shuffling of track order and track changes. Songs which appeared on 'Rare Tracks & Remixes' and also appear here include Hero Dead and Gone (Discotheque mix), Drop Down Low, No Jive (Ripped version), Downtown Tazacorte, Jazz Music (Strings), Plastic Love Memory (no. Nine) and the ManMachineMan remix of Good Boy. Love Set You Going was also on 'Rare Tracks & Remixes' (as Love Set U Going), but it was a different mix.

Love Set You Going was in fact originally on the L.A.H.R. album called Lyrical Amusement from 2001 - an album produced by Pit Baumgartner, which was a solo project featuring De-Phazz vocalist Barbara Lahr. So for those of us wondering about that side project, this is a good intro track for both that cd and for 'Plastic Love Memory.' I'd love to hear more from Lyrical Amusement.

Mambo Craze is heard here in two different mixes - the Swing Mix and the UR Craze Remix - so it's great to hear more mixes of one of De-Phazz's best songs.

Radio Soul is exclusive to this compilation but its basically a Mambo Craze interlude.

If you don't have their full lengths, keep an eye out for the 'Best of De-Phazz' disc to hear more by this superb group.