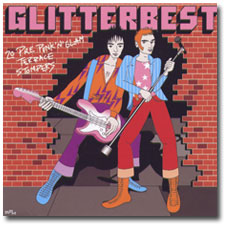 This is a bunch of bands that connect the Glam sounds of The New York Dolls, Sparks and Mott The Hoople and punk bands like Joy Division, The Sex Pistols and The Vibrators and even influencing the later years of Brit Pop and bands like Pulp.

Glitterbest is much less novelty and one-offs like Velvet Tinmine was, and much more rocking solid bands trying to find a place in a time not yet their own.

Things start out raw and heavy with The Hammersmith Gorillas' mayhem inducing cover of The Kinks' You Really Got Me from 1974. I'm quite sure Van Halen had a listen to this before they tackled this song on their debut album in 1978.

The Hammersmith Gorillas later became Raw Records punk band The Gorillas (in 1978) and featured Jesse Hector also from Helter Skelter and Crushed Butler (two other bands featured on Glitterbest - Crushed Butler's High School Dropout is a raw standout featured later on the disc from 1971 which recalls Jerry Lee Lewis if he fronted a pounding glam band).

Streak featured future Vibrators member Ben Brierley (who was married to Marianne Faithfull and appeared on the Don Was produced album Sleep It Off by Cristina later in 1984) and members of The Arrows. Bang Bang Bullet is Streak's take on The New York Dolls sound and it works perfectly.

Jet's Nothing to Do With Us is one of my favorite tracks here - with its tense bassline and explosive drums, its off kilter rhythm breaks and angsty vocals are the perfect precursor to the Brit Pop of bands like Pulp.

Flintlock's Sooner or Later is a refreshing power punk number which would fit right next to The Rezillos space retro pop punk style.

Session guitarist Chris Spedding (Sex Pistols and Cramps demo producer and an ex-Womble) joined the then un-recorded Vibrators in 1976 to record the amazing early punk single Pogo Dancing, which pretty much speaks for itself.

I kept coming back to the raw New York Dolls inspired style of Despair - an early group for Vibrators member Knox. Their Sweet Sweet Heart is the kind of glam angst I love so much and is a demo version of a song which ended up on The Vibrator's first album Pure Mania in 1977.

England's Glory has Peter Perrett later of The Only Ones doing an amazing Lou Reed impersonation on City of Fun.

Glitterbest ends with the punkest moment yet - The Hollywood Brats' Sick on You. According to Brat's member Eunan Brady "The whole point of The Hollywood Brats was to annoy and disturb!" Well, they do just that on the raw, sloppy Stooges' inspired original version of Sick on You which was later covered by The Boys. You can't go wrong with lyrics like this....

I ain't sadistic, masochistic
You and me are through
I`m sick to death of everything you do
And if I'm gonna have a puke you bet yer life I'll puke on you

It's been six weeks and that`s six weeks too long
You thought we were Romeo and Juliet
You couldn't have been more wrong
So pack your rags in to your bags
Get back where you belong
I`m sure they miss you, it`s really quite a shame
I hear Skid Row's just never been the same

RPM's slammin' 70s in the gullbuy: