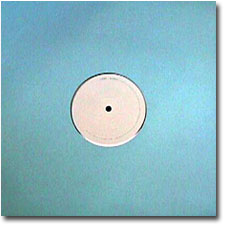 Lump is electronic music artist René Desalmand. This is his second 12inch on Mgltd, an imprint of the Geneva label Mental Groove records. He also has a 12inch on Karloff Records.

Bleux starts off with a sound like a hard round object bouncing on a vibrating glass table, with a steady bass drum and hi-hat beat. Lump uses only sounds he finds that he likes. Does he like Led Zeppelin? I hear a bit of the riff of Misty Mountain Hop in his electronics. This track will appeal to people who like the tracks Lawrence does with beats.

B-Print comes on like a recording of a rainy day, or is it the crackle of a record after the side has played? A fast beat comes in, then a wild "wooah" that sounds more like an Indian war cray in a Western than a crazed metal fan yelling for an encore, even though a single chord of heavy metal guitar would suggest the ladder.

A German reading by Christian Ahlers over Lump's music follows these stage setting sounds. The track is lighter in feel than the A-side. There is also a reggae feel with the pumping organ and dub styled bass below the reading.

Many sounds make appearances in these tracks, and none of them appear stuck in without reason. I'll bet it would be fun to talk with him and find out the story of some of the source material he used mixed in with his electronics on this 12inch.