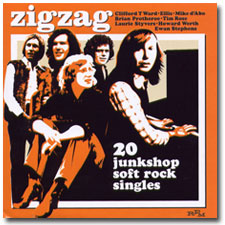 RPM label from the UK has been producing called the Lipsmackin' 70s. ZigZag the cd is named after the magazine which spotlighted this very music in the 1970s, even music which didn't go onto great fame - and the fine folks at RPM have done it again by compiling a compelling listen consisting of first rate music of a the highest caliber - the lot of which you've probably never even heard before even if you may have heard of them. It turns out the 1970s was the stomping grounds for a lot of great musicians and singer songwriters, most of whom ended up being a blip on the map as they went unnoticed in the history of music. RPM have done it again with another fine compilation to help open our ears to some lost, great music.

ZigZag is full of great music by artists and singer songwriters including:

Neil MacArthur (aka Colin Blunstone, after The Zombies had broken up), Clifford T. Ward (heard here in demo form), Steve Ellis (along with The Animals' Zoot Money), John Carter (from 60s groups The Ivy League and The Flower Pot Men, and songwriter of Herman's Hermits' Can't You Heart My Heartbeat and The Music Explosion's Little Bit o' Soul, amongst others), Tim Rose (produced by Spooky Tooth's Gary Wright), Mike d'Abo (ex-lead singer from the Manfred Mann), Jake (another pseudonym for The Murgatroyd Band which was actually The Spencer Davis Group minus Steve Winwood and who can be heard on RPM's Magpie disc), singer Leo Sayer (fresh from writing an album for The Who's Roger Daltrey), John Howard (who had turned down playing in Iron Maiden and worked with Rod Argent here with string arrangements by Alan Hawkshaw) Laurie Styvers (who worked with Jerry Donahue, guitarist from Fairport Convention), Howard Werth (who can also be heard on Dangerhouse, Vol. 1), Ewan Stephens (produced by Ray Fenwick and Eddie Hardin, from the post-Stevie Winwood lineup of The Spencer Davis Group), Ray Fenwick (himself), Brian Protheroe (one of my favorite finds on this disc), Curtiss Maldoon (released music on Deep Purple's record label called Purple, as well as writing the song that was re-worked in Madonna's Ray of Light), Mike Hurst (founder of the group Fancy, which included Ray Fenwick and Alan Hawkshaw and did an amazing cover of Wild Thing which can be found on RPM's Velvet Tinmine - 20 Junk Shop Glam Ravers - Mike was also in The Springfields with Dusty Springfield, as well as worked with Marc Bolan, Cat Stevens, Manfred Mann, The Move, Spencer Davis Group, Colin Blunstone, Chris Farlowe and P.P. Arnold), Lesley Duncan (backup singer for the likes of The Dave Clark 5, Pink Floyd, the Alan Parsons Project, and Elton John, as well as a songwriter for Sir Elton, and Olivia-Newton John), English Rose (from the soundtrack to the movie Groupie Girl), and The Sarstedt Brothers (shortly after working with Tony Visconti).

There are many highlights to be found - but my favorites include Brian Protheroe's Pinball, which sounds like a mysterious take on the sound of early 70s Traffic without all of the useless jazz noodling and watery production.

Clifford T. Ward's Wherewithall is one of those sweet gems we come to expect from McCarthney/Beatle influenced British music. A pure delight.

I was really taken by The Sarstedt Brothers' folk rock of Chinese Restaurant, which has an Al Stewart or Cat Stevens feeling mixed with some nice fuzz guitar.

I'd heard that the Groupie Girl soundtrack was finally going to get a legit cd reissue - here's hoping that is true. Until then it's great to hear The Small Faces' inspired by Yesterday's Heroes by English Rose.

I originally wanted this compilation for Neil MacArthur (aka Colin Blunstone) singing the rarity It's Not Easy recorded between The Zombies breakup and his first solo album - and it's definitely worth the price to hear Colin let lose on this soulful number.

Laurie Styvers' Beat the Reaper has that delicate beauty that music like Judee Sill had in the early 70s - haunting melodies, double tracked vocals, hovering arrangements with flutes and loping rhythms. It's the kind of sound people like Elton John killed with over flamboyance, which is a shame. Everything Changes by Lesley Duncan also got that meltingly beautiful melancholy singers like Judee Sill were mining at the time - it's sweet song which shows what this session singer had to offer.

Ray Fenwick's Home Is Where You Find It could well be a Spooky Tooth tune - for those into that sound.

The most upbeat song has to be Curtiss Maldoon's One Way Ticket which has a hopping country rock sound which meets half with power pop and works perfectly.

The only track that left me cold was Tim Rose's cover of The Beatles' You've Got to Hide Your Love Away which plods along.