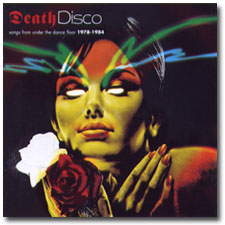 I love punk, but to be honest (and this is probably very uncool), I’ve always liked post-punk better. I won’t even mention that of the 3 million punk songs that have come out since around 1980, I’ve only liked a very small handful of songs in the classic “punk” ethos.

Yes, I still love early the Clash, Ramones, Pistols, X, Wire, The Damned, Buzzcocks, etc. and I even liked some stuff by Jerry’s Kids, JFA, Black Flag, and a few others. If you don’t want to be friends with me anymore, I understand. The thing is, even Wire, The Clash, The Damned, Buzzcocks, and Johnny Rotten himself - all got tired of playing loud fast three-chord punk. It was done. It might have even been perfected.

So where do you go from there? Well, that was the beauty of punk. You were free to go anywhere. And the more “out” there, the better. Enter post-punk, one of the greatest eras in rock. Calling it “rock” was even debatable. Bands like P.I.L, Killing Joke, Gang of Four, The Au Pairs, Throbbing Gristle, etc. took what we knew as rock and turned it completely on its head by giving us something we couldn’t really trace back to anything.

Of course, there were influences, but mostly just little pieces here and there. Most of what was going on hadn’t really been done before. Where punk rock drew from mid-sixties garage psychedelia, post-punk didn’t seem to draw from anything but itself and a rise to the challenge to create something genuinely new - to borrow as little as possible from the past as possible and push things forward. As is the case with any kind of experimental art, sometimes it worked, and sometimes it was... interesting. And as is the case with originality, it had limited commercial appeal.

Like the term “indie rock”, the term “post-punk” did nothing to describe the music itself. And like indie rock, there was no term that could have ever done the job because there was no specific sound that could be called “post-punk”. It wasn’t a kind of music. It was an era. And within that era, there developed a number of musical trends. Things branched off into many directions. A few bands did something genuinely different and hundreds of others followed suit.

If post-punk could be chopped into a handful of musical categories, the 'Death Disco' compilation focuses on the dance music factor… with some of the No Wave factor mixed in.

The album opens with P.I.L. Death Disco from their 1979 classic 'Metal Box / Second Edition'. With punk rock dying fast and the Sex Pistols already defunct, the question on everyone’s mind was, “what next?” This was Johnny Rotten/Lydon’s answer. Where the first P.I.L. record was still treading some of the old ground, Metal Box charted completely new territory. Jah Wobble’s bass and Keith Levene’s guitar interplay on this song is poetic. The song only suffers from Lydon’s monotonous whining. The song made for a good compilation title track, I suppose.

Jah Wobble appears again on the next track by The Steel Leg vs. The Electric Dread. This was just a one-off 12inch project featuring punk film maker Don Letts. The noise making and bassy dirge intro is neat but overall, it’s an uninspired toss-off featured for its novelty.

Suddenly, we jump to 1982 for Gang of Four’s dance floor / college radio hit I Love a Man in a Uniform. Of all the incredible Gang of Four moments to pick from, they chose the one everybody already knows a hundred times over. Another, more obscure Leeds band, Delta 5 is featured with an edgy track from 1981. I don’t know much about the group besides the fact that they wrote Mind Your Own Business, but my friend used to rave about them a lot. Worth a listen.

Next, we get into synth-minimalism mode, starting with The Normal’s Warm Leatherette (for the millionth time) and Throbbing Gristle’s 1978 classic United. Both of these defined many things to come for the 80’s... and many things to came back again a few years ago.

Brian Eno & David Byrne’s The Jezebel Spirit feels a little out of place, but if the point is to highlight seminal moments in post-punk, this collaboration was indispensable - not only for post-punk, but as a groundbreaking and enormously influential moment in pop. There were many firsts on this album that eventually became the norm. Sampling. Using found voices as a vocal. Collage music in the context of pop. Ironically, the intention to bring obscure African rhythms into the pop mainstream never quite gelled in the longrun.

Rip Rig & Panic may have well created one of the lamest songs I’ve ever heard, featuring Gareth Sager and Bruce Smith, formerly of The Pop Group, with Neneh Cherry on vocals. At fist, I actually thought it was a tongue-in-cheek thing. I was wrong. It’s was just bad.

The Cabaret Voltaire selection would have probably been my last choice of CV songs to feature here. The Higsons, held in high esteem by John Peel for a while, put the album back into high gear with the fast-driving, polyrhythmic Put The Punk Back Into Funk.

The 1981 line-up of The Lounge Lizards features Lizard mainstay John Lurie with Anton Fier (pre Feelies / Golden Palominos) and Arto Lindsay (DNA and currently of Arto Lindsay fame). XTC might have the highlight of the album with a track from 1978’s 'Go 2' (one of the greatest album covers of all time). The Buzzcocks Why Can’t I Touch it is great, but again, we already knew that.

Bridging the gap between the rock and synth-pop is the Simple Minds track Theme for Great Cities. Believe it or not, there was a phase when they were one of the most original and “out” bands of their time (see 'Real to Reel Cacaphony'). Theme for Great Cities was near-perfect, pulling a little from their past and giving a hint of things to come - for better and for worse. It's one of the strongest tracks on the compilation.

Now back to synth-pop with Human League’s Hard Times and their offspring, Heaven 17 doing (We Don’t Need That) Facist Groove Thang. 23 years later and I still can’t get enough of either song.

For the most part (with a lot of essentials left off the list), EMI picked a lot of the right bands for 'Death Disco'. While it suffers in many of the track selections, the compilation works nicely as a primer and does well to unearth a few gems from one of the most adventurous eras in rock or pop music.