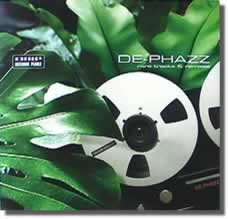 Pit uses a sampler as an instrument in De-Phazz. De-Phazz plays live, making their songs different yet as good as their studio recordings. THAT is a rare thing for such a multi-layered band as this. Many artists could not bring as rich a sound as De-Phazz to the stage with success. The band plays both instrumental and vocal songs.

There are three main vocal presences: a male voice (Karl Frierson ), a female voice (Pat Appleton), and the lyrical trumpet/trombone of Joo Kraus. In addition there is the sax work of Frank Spaniol.

On their web site they describe the De-Phazz sound like this: 'Dub and Disco, Soul and Jazz, electronic Chansons and loungy Zulu-Grooves, a touch of Dancehall and every possible Latin-rhythm mix themselves into something new, exciting, never seen or heard before. One could call it Loungecore, Mamboom, Swank, 'Kitsch with Class' or maybe just Music.'

Rare Tracks & Remixes is their fourth full length release. They have a new LP called Daily Llama that I have not been able to find yet. There are fifteen songs on Rare Tracks & Remixes, and none of them are weak. I like this record (and this band) a lot!

The CD starts off with the extended version of The Mambo Craze. When The Mambo Craze first appeared on their second record Godsdog I loved the track. The new version is quite fine. It adds a few voice samples. I wish I could identify them all! I did recognize Ricky Ricardo saying 'Why Lucy, your eyes are filled with tears' and Jane Jetson saying 'The orchestra's getting ready. Dance with me George.' There are a few echo effects added to the music and vocals of the song as well. The Mambo Craze is a very attractive song, no doubt.

The Phazz-a-delic mix of Something Special is a dub version of one of the tracks from their third album Death By Chocolate. To me is is not as effective as the duet version which appears on this CD as track 12.

Nameless Life is a smooth rap song with vocals by Andre Coleman. Though smooth, there are a few choice curse words that will exclude this track from consideration for college radio airplay.

Drop Down Low repeats 'till you drop down low to swing your hips, that's all you need to do' while cool music skitters below. You see, De-Phazz are not just a downtempo band. The music of Drop Down Low is hyperactive and quirky - more than a little psychedelic.

Love Set U Going has Barbara Lahr (who did the smoky jazz number earlier) doing a slinky Blondie 'Rapture' styled rap. Love Set U Going is another jewel for De-Phazz that is not on any of the full lengths.

Pressurized is an unreleased song that has tons of trumpet in a liquid smooth track like Chuck Mangione gigging the Cotton Club in Harlem.

No Jive (Ripped version) is a different version of a song from Detunized Gravity. No Jive starts off with a child saying 'I wish that guns wouldn't kill people, they would only make them fall asleep.' The song repeats 'I don't want no jive' and '16 shots' and talks about guns, with the same child counting, but you realize he is reciting gun calipers. It is a well put together track that first appeared on the 1999 Hotel Costes compilation out of France.

Downtown Tazacorte is a percussive track with lots of trombone, similar to Groove Armada's 1999 hit 'At The River.'

Plastic Love Memory (no. Nine) is a dubbed out instrumental with many samples. The music goes all over the place in the manner of all the best De-Phazz songs.

The ManMachineMan remix of Good Boy (the smoky jazz song Barbara Lahr sang earlier on the disc) reinvents the song to a beat like the Serge Gainsbourg song 'Bonnie and Clyde,' with the vocals sounding a lot like Roisin Murphy in Moloko.

Rare Tracks & Remixes closes with the most classic of all De-Phazz tracks. Jazz Music first appeared on the second Costes compilation 'La Suite,' then on the Godsdog album. 'Jazz Music' is the De-Phazz as 'In The Waiting Line' is to Zero 7, 'Summer Sun' is to Koop, or 'Sing It Back' is to Moloko. The version of Jazz Music on this disc is spiced up with some strings. It is a great complement to the original with every bit of the Wow appeal.

Every record by De-Phazz is a delight. In a world that disappoints so frequently, I have happiness when I listen to this band.