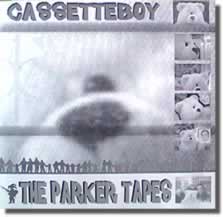 You know those radio station IDs that sample little bits of songs, movie dialogues, commercial bits, etc. etc. -- a second or two of each, then ending with the station ID? They work pretty well for ... about 15 to 30 seconds.

Now imagine a whole album of those. Okay, you're right, Negativeland did it already. And I'm sure a lot of work went towards Cassetteboy's CD, The Parker Tapes, recorded between 1995 - 2000. They can surely pat themselves on the back for that.

But what's missing here is the cohesion and intensity that pushes Negativeland's music far beyond simple collage -- and the conceptual tape that turns a random collage into an actual piece worth hearing.

Cassetteboy has it's moments, as on Wind it up Rob, we'll dance. And there are pieces that are pieced together by a concept -- but nothing you haven't heard a few hundred times already.

It's pure sampling madness at the peak of an Attention Deficit Disorder. While I thought this might provide a nice contrast to the monotony of most techno / looping / sampled loops / ambient, etc., I was wrong. This stuff completely lacked intensity. I could see it being done well ... just not here.

The pieces may work individually in the context of a radio show. They'd be great for those radio station IDs if you're too lazy to collage things yourself. But as a CD -- as a whole, it stops working after about ... 30 seconds. Really.

It's a mishmash of random recordings and it gets old fast. It's neato. It's probably really neato when you're 15 and really stoned. But still, only for maybe a couple of minutes. There's nothing here that hasn't been done already. (See Plunderphonics, Negativeland, etc). What makes this different? It's not as good.