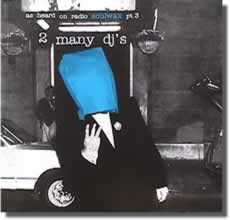 It turns out we have been amongst the lucky few to get our hands on the 3 part 2 Many DJs series of compilations for the price we've been getting them because copies have been selling at ebay for $50 plus each.

Part 3 might well be the most exciting edition yet - it definitely is the most rocking mix so far, thanks in part to bands like Van Halen, Led Zeppelin and Motley Crue - but also thanks to the driving beats that work the whole thing into a frenzy.

While I'm not going to go so far as to say it is the best mix, I think it's the one that sends the 2 Many DJs compilations into the nether regions: it sounds like a late night mix, not one of those mellow chill out affairs either, this set is pumped up - high octane stuff.

It's got music for the head banger in us and for the dancefloor; it's got something for the loungeheads and it's even got something for those who like song links between the songs. And as a breath of fresh air it's got very little of what have become the bootleg staples. So while it may be rough around some of it's edges - some of the mixes come off as jarring - I think this mix is a pleasant surprise for the series in that it doesn't feel like it's gotten old - it sounds in fact remarkably fresh.

1-2. The first track called Protest Speech is a choice sample from the major motion picture called Network from 1976 (link to full sample text), a rant by Howard Beale (played by Peter Finch) about the dire state of things which still rings true today. This merges into the over the top antics of Van Halen Eruption (with special interlude from a short sample 'Wow....sound editing just keeps getting easier and easier' making a self-referential statement on Soulwax's technique) and who wasn't awed by these pyrotechnics - in fact who doesn't remember when they first heard Van Halen's antics?

3-6. Daft Punk Superheroes follows taking things into dance floor mode, seamlessly merging into the Queen Of Japan Kiss cover I Was Made For Loving You with some emotional 80s styled vocalization - and an addicting sound. Mis-labeled on the disc as New Order's Crystal (Lee Coombes Mix) next up it's actually New Order 586 at hyperspeed mixed to good effect with the Viscious Pink song 8.15 To Nowhere.

7. Another Vicious Pink song follows - an odd mix into a cover of Great Balls Of Fire to break up things a bit and it works well - definitely spurring my curiosity about this band.

8. Things get quickly back into a rocking mode with Led Zeppelin Misty Mountain Hop for some squealing vocals and whiny chorus vocals.

9-10. The first and one of the few electro songs merges somewhat with the Zeppelin tune in a phasered out mode with the scorcher La Rock by Vitalic and their irresistible beat. This fuzzes out into Prince Lets Go Crazy (the intro) which then gets manipulated with stops and starts.

11. Things take a twist into a half minute of Inner City Big Fun (the Soulwax Re-Edit) before merging into the already classic duet between Louis Austin and Peaches on their tantalizing Grab My Shaft.

13. Next up is the Mustapha Dance version of The Clash Rock The Casbah which definitely gives me a twinge this week due to the passing of Joe Strummer.

14-17. A set break with a sample from a speech from Radio Queens which goes right into Jeans Team Klein Melodien for some more electro with German vocals. This is one of the longer tracks in this mix at almost 3 minutes, mixing into Los Ninos Del Parque by Liaisons Dangereuses for a half a minute and then into the drum pattern from The Beatles Strawberries Fields (Demo Take 7 Edit) for the definite high point in this mix.

18. Things start to get into a prog madness with Corporation Of One The Real Life vs. Simple Minds Theme From Great Cities thus ending one of the best segments in this mix.

19-20. Kagami's Tokyo Disco Music keeps the pace fast and furious mixing into more mayhem in Midfield General's Coat Noize - this is the get down and boogie on the dancefloor section of the mix.

21. My least favorite section of the mix is this 2 Live Crew Live! bit (and watch for the profanity).

22. Luckily the previous track is short enough and The Chemical Brothers Come With Us is long enough (almost 3 minutes) - with some incredible beats coming in and out of the mix.

23-31. Up next is the songs linked by a theme (mentioned earlier in the review) - the theme being Boys and Girls. Songs in this section include Androgeny (Felix da Housecat Remix) by Garbage, Blur's Girls & Boys, Prince's Girls & Boys, The Chemical Brothers' Hey Boy Hey Girl, Sabrina's Boys Boys Boys Motley Crue's Girls Girls Girls, The Waitresses I Know What Guys Like, The Moments' Girls and Modjo's Lady (Hear Me Tonight). This definitely makes for a great mix and is another highlight.

32-33. Evolution Control Committee's Rebel Without A Pause - Herb Albert vs. Public Enemy is a classic and mixes well with Tito Puente's cover of Its Not Unusual - both great mixes.

34-38. Things get funky with Naughty By Nature's O.P.P. - an almost Jackson 5 feel to it (sounding like they sampled them) merging into thirty seconds of Full Force's Alice I Want You Just For Me straight into Missy Elliot's One Minute Man. Missy then mixes seamlessly into New Edition's Instrumental mix of Candy Girl which is used under Le Club's Un Fait Divers Et Rien De Plus (profanity mixed throughout these tracks).

41-46. Next up is some French rap with The Croisants' song called Andy Warhol for some really cool rhythm sounds and keyboards - 80 style. This mixes seamlessly into The Warhols Sun Comes Up and briefly into the guitar riff from Lemon Jelly's Mamma I'm Sure.. which intros well into Shake What Ya Mama Gave Ya by Sticks In The Hood. This climaxes in the uncredited Black Crowe's cover of Hard to Handle with added record scratches. the end of this is another got to be heard rhythm breakdown mix - well worth the searching and another highlight to the disc. This mixes right into Mantronix's King Of The Beats vs. House Of Pain's Jump Around in this manner in a completely rocking mode. Things end on a more laidback funk work-out for half a minute of Well Its Still All Good Y'All by Steinski & The Mass Media. Yet another fitting conclusion to 2 Many DJs Part 3 and what has turned out to be a tremendous series of mix discs. The mixes are flying a mile a minute and then some and Soulwax keeps up the crate digging and the momentum.