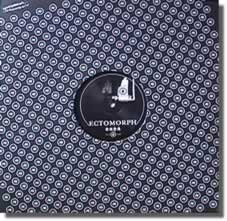 Ectomorph is an electro project from Detroit, centered upon Brendan M Gillen, or BMG for short.

BMG formed Ectomorph in 1994 with Gerald of the Detroit new wave group The Batteries. Gerald was later replaced by Erika Sherman. From 2000 on BMG and Erika have collaborated with DJ Godfather and Carlos Souffront.

Dada is a two song 12inch on their own label, Interdimensional Transmissions. Ectomorph was named after the London fetish clothes store Ectomorph. Ectomorph's music fits in well with other Detroit artists like Drexciya, Dopplereffekt, Adult, or DJ Godfather (except Ectomorph is all instrumental).

There is an air of mystery in the two songs on this 12inch, and very electronic sounds that are all in the right place. Supposedly this 12inch is the precurson to an upcoming full length. I'll bet it will be really good!

The Interdimensional Transmissions web site has photos of the band playing in NY. They use fire in ways I have missed since last seeing Pineal Ventana perform at Dotties in Atlanta, or Faust perform at the Royal Festival Hall in London.

If you enjoy modern electronic sounds with a dance beat and intriguing rhythms, I know you will really like this Ectomorph 12inch.