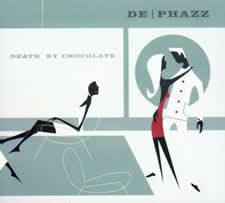 If you read the gullbuy regularly you will know that I love De Phazz. I have enjoyed both of their previous CDs, 'Detunized Gravity' and 'Godsdog'.

Now this German downbeat pop band have given everyone a great reason to notice them - 'Death By Chocolate'. No - this has nothing to do with the band on Siesta with the same name - THIS death by chocolate is just the title of a great collection of songs.

'Something Special' is so catchy and clever that I was surprised. The song reminded me of the Portland Oregon band Pink Martini, who contributed 'Symphatique' to the first Costes compilation in 1999.

Two songs later I was hit by the chords from Tommy James & The Shondells 'Crystal Blue Persuasion', used as the launching point for the De Phazz song 'Sabbatical'. So fine!

Then there is the song 'Jeunesse Doree', which mambos like the sexiest Mansfield song and recalls the 70's Parisian band The Shorts who recorded 'Comment Ca Va', both songs sharing the lyric 'come see come sa'.

To bring things right into the present tune into the song 'Online' which carries the same theme Baxendale did on their song 'The Future' or Elektrostar did on 'The Future Was Yesterday' on the still amazing RO 3003 compilation Bungalow put out in 1997. 'Online' is sexy and smooth, just like De Phazz themselves.

I had high expectations for this disc, and I am quite happy with what was delivered.