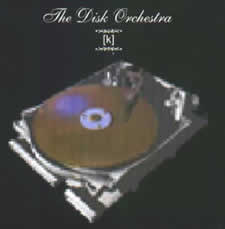 Like an electronic version of a Carl Stalling cartoon soundtrack, The Disk Orchestra skitters about during 99 tracks of very short pieces that really need to be played in series as opposed to as single tracks.

All the elements we love from Uwe Schmidt are here, plus the countless odd flourish of the unexpected that has become the expected trademark of this German chameleon who lives in Santiago Chile and records under dozens of names including Midisport, Los Samplers, Atom & Tea Time, Señor Coconut, Lisa Carbon, Atom Heart, and Lassigue Bendthaus to name a few.

One second you are hearing Johann Strauss' 'Blue Danube' (track 55) and a minute later you'd better not be playing this on the air as someone is saying 'Godd*mn drum machine' in a street cadence.

The construction of this CD is a frustration to me, but I am sure that is exactly what the man himself intended.

other Uwe Schmidt projects in the gullbuy: