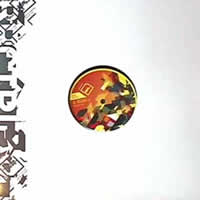 Kiki is Joakim Ijas from Finland. 'Hott!' is his second 12" for Berlin's Bpitch Control. It follows up his 'Gas 126' single.

The 'Hott!' 12" has four tracks. The first cut (also called Hott!) has vocals that remind me of Frank Zappa if he was singing for The Normal. Hott! is outstanding. It has a ticking percussion part that almost reminds me of Afro-beat, a 4/4 beat (seemingly a staple in the modern electropop stuff), cool sounds, and lots of male vocals with that Zappa styled deep voice.

The second cut on the A-side is Universal. It has more of that cool percussion, but otherwise does not strike me overly.

Onto the flip, Revelation has crisp crystalline electronic beats. It has bells in it that once again remind me of Afro-beat. There is a processed vocal I wish wasn't there that repeats some phrase (sounds like "the pulse music") over and over. Revelation starts strong but goes on too long for me, though I guess it was meant as a dancefloor track.

The final track is YKSin, a vocal track that has sounds which remind me of the Kraftwerk track Robots. There are more of the deep "Zappa" vocals along with a more subdued whispery vocal and a cellular phone type sound.

Hott! is my fave and YKSin my second fave.