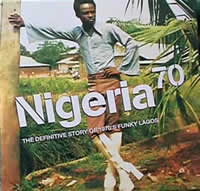 OK - I will not be able to do justice to this in the space of a review. Bottom Line: If you like Afro-beat this is a good way to spend some cash. The package is cool before you even put on the records. What record has a better photo on the sleeve than this does?

Inside are 2 CDs which make up the tracks on the triple LP vinyl version, plus a third CD which is a documentary of Afro-beat. The documentary would be excellent for a DJ to play anytime she needed to fill up a decent block of space. It is 65 minutes long, indexed into 6 sections, though it plays as one continuous piece if you are just listening to it. The documentary has music and key people talking about the Lagos scene just as independence was coming about in the early 70's. I love the section with Ginger Baker talking about Salt. Salt was the group he fronted after Cream, which spawned the Nigerian band Blo. Sadly Salt never recorded.

Onto the discs proper, there are no tracks you will want to skip over. The whole thing is one great listen. No band has more than one cut. Most of the tracks are incredibly upbeat, with focused jamming on lots of cuts. Some tracks are fairly psychedelic, such as Blo's cut "Chant to Mother Earth".

What makes 'Nigeria 70' so cool is the drums. They are so 'right there'. Rhythm is the center of everything, and these musicians have intuitive skills that allow them to weave in and out of a track in ways that amazingly seem to add to the strength of the core rhythm.

The one song which is my favorite on the whole set is Bala Miller & The Great Music Pyrameeds Of Afrika Ikon Allah. I've got to find out if there is more stuff by this band, it stands out so far above the rest even on this super strong comp.

Stuff I like best from the first CD in the set are Peter King's "Shango", Tony Allen & His Afro Messenger's "No Discrimination", and William Onyeabor's "Better Change Your Mind". William Onyeabor's voice has a mello Hendrix lilt to it.

On the second CD I like Ofo The Black Company's "Allah Wakbarr", Sahara All Stars Band Jos "Enjoy Yourself" (my favorite track on disc 2), Joni Haastrup's "Greetings", Lijadu Sister's "Orere Elijgbo", and Shina Williams & His African Percussionists "Agboju Logun". True to my personal style all these tracks have an unstoppable beat and a bright tone.