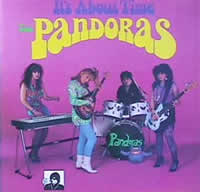 First, I'd like to apologize in advance as I fear I may ramble on a bit. I don't even know where to start talking about this album -- I listened to it over and over again in years past.

This album stands the test of time and is a welcome addition to the gullbuy. The Pandoras were an all-girl garage revival band (guitar, drums, bass, and Farfisa) from LA in the early '80s, led by one Paula Pierce (who tragically died of an aneurysm at 31, 10 years ago).

Their sound was totally authentic and when they cut loose, they sounded downright psychotic. Unlike many bands of the "Paisley Underground" scene at the time, The Pandoras emulated the wilder, more primitive bands of the sixties, like the Standells, the Seeds, and the Shadows of Knight (pre-Super K, as if I need to make the distinction). And they didn't make the mistake of glossing up their recordings, as many of their otherwise like-minded contemporaries did.

It's About Time, their debut album, was originally released on Voxx in 1984. An early CD version of the album on ESD (released, as I recall, in the late '80s) appended 5 tracks from an earlier EP and a subsequent single. The CD being added this week was released by Voxx in 1993 and includes all the bonus tracks from the earlier CD, plus four additional tracks -- demos, outtakes and an interview.

While I'm cataloging all the different versions of this album, here's one more: One of the songs on the album, "The Hump" was originally done in 1965 by a group called The Invictas. When that song was banned from the airwaves due to fact that it was a dirty, dirty song (well, by 1965 standards, anyhow), they released an alternate version called "The Hook." There's a French LP version of the Pandoras' It's About Time and instead of "The Hump" they do "The Hook." How cool is that? I wonder why they didn't include that on any of the CD versions?

Picking favorites on this album is difficult, as I love them all so very much but since I feel obligated, I'll list a few of the tracks I love best: Want Need Love, Haunted Beach Party (an awesome, spooky instro -- play it back to back with the Slickee Boys' "Crawling Hand"), Hot Generation (from a 1984 single), That's Your Way Out (from their debut EP), Going His Way (nice "Psychotic Reaction"-style freakouts), and the moody He's Not Far.

I give this album my most hearty and thoroughly biased recommendation.