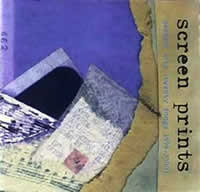 George is a writer for the gullbuy and a DJ at WZBC (his "Off the Cuff" show airs Fridays from 7-10pm) and has long been a champion of Screen Prints; in fact, the first time I ever heard them was on his show. I liked it so much I called to find out what it was.

Beautiful melodic pop from Manchester. Some tracks are quite mellow, while others are more on the upbeat, poppy side -- and almost half are instrumentals. I hear influences from all over the map: Teenage Fanclub, Jesus & Mary Chain, Belle & Sebastian, Beach Boys.

This CD compiles pretty much all their previously released material and adds a bunch of unreleased stuff. We have fewer than half of the songs here, and all those are on vinyl (most on a 10" added earlier this year: See Screen Prints in gullbuy).