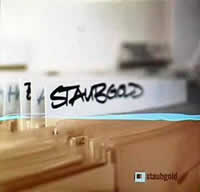 Add in a soul and subtract much of the lazy repetition that plagues a lot of minimalist and electonic scenes and you have a rough picture of Germany's Staubgold records.

Their tagline fits. "Music out of place." Electronic music is perhaps at a peak of sorts right now in finding untraveled terrain and keeping us engaged once we're brought there. It seems like Staubgold chooses to focus on artists that, for the most part, do that well. Minimalism minus monotony, if you will. That's not to say the repetition or looping isn't there. Rather, most of these artists at least attempt and usually succeed at keeping things interesting.

At times (in the case of Groenland Orchester and Alexander Balenesque), it all gets pretty dramatic, especially within the context. To Roccoco Rot is here. Mapstation stands out a bit. They've blessed us with some nice 7"s and 12"s, and have couple full lengths. The group features To Rococo Rot member Stefan Schneider.

Schlammpeitziger have been somewhat of an staple in the German experimental electronic scene since the early to mid-nineties. The Reuber track was slightly disappointing in it's monotony. Rafael Toral tones things down from his sonic booms to one of the most drawing, beautiful cuts on the comp. Ekkehard Ehlers contributes a few outstanding tracks, if not a bit more challeging.

Over all, the album works quite well straight through as a late night treat.