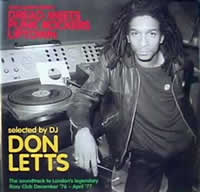 Who could resist this? A compilation of reggae cuts which were played in the London Roxy Club as punk was exploding from December '76 - April '77. Bob Marley had even acknowledged the crossover audience which was occuring at that time in his song Punky Reggae Party (not included on this comp).

The 16 cuts collected have a high energy threshold and sound quite excellent here in 2002. As I write this I am listening to Big Youth's Marcus Garvey and completely loving it. The usual suspects are here: King Tubby, U-Roy, The Mighty Diamonds, Augustus Pablo, Lee Perry - but many others of top quality are here as well. Junior Byles, Tappa Zukie (with 2 songs), Jah Stitch, The Congos, Horace Andy, U Brown, Culture, Sylford Walker, and Junior Murvin have killer cuts.

Junior Murvin's track Police And Thieves was covered by The Clash on their first LP. My favorite vocal tracks are Big Youth's Marcus Garvey (#2) and U-Roy's Wear You to The Ball (#7). Culture's song Two Seven's Clash was mega-big back in 1977, though it isn't one of my faves.

As usual these days, my real faves are the dub tracks. My fave dubs are Tappa Zukie's M.P.L.A. Dub (remember the Sex Pistol's reference to the MPLA in Anarchy In The UK?), Tappa Zukie's Rush I Some dub (#8), Augustus Pablo's King Tubby Meets Rockers Uptown (#11), and Lee Perry & The Upsetter's The Takro (#16).