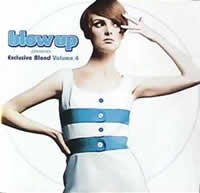 If you have been a longtime gullbuy reader you know that I have reviewed all four of the Blow Up Exclusive Blend compilations.

I enjoy Blow Up's compilations and 7" singles. The latest volume in this series is much better that I had expected it to be. Volume 3 did not stick with me as much as I had hoped. This new compilation really kicks, and has many songs that are completely primo: not just 'lets dig a little deeper in the barrel for another volume' type stuff.

What the Blow Up folks have done for this CD is gather dancefloor friendly recordings from the French Chappell DMM series of library music LPs recorded in Paris from 1966 to the early 70's. This means that there are only a few artists on the comp (six, in fact).

Characteristics of my fave tracks are a very happening Fender bass and a go-go beat. If you have the earlier Blow Up comps and still like them you would do well to buy this one too.