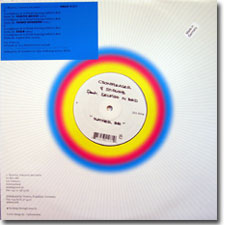 Mental Groove features much of its best work on their 12 inch singles, and the Crowdpleaser & St Plomb featuring Selfish In Bed single with 4 remixes of their song Rather Be (the original of which is featured on the Mental Groove compilation Where Is Here) is no exception. The Rather Be 12 inch features 3 mixes by Scratch Massive, Thomas Brinkmann, and Gergm, as well as the original demo version.

I found myself enjoying the two mixes on the a-side the most. Things start out strong on the Scratch Massive remix of Rather Be, which sails along in a trance mode with sampled in vocals as the synths pulse for a good 7 and a half minutes. Thomas Brinkmann follows up this vibe and centers his attention on the breathing, sensual feel that then accents the blip of the beat. The b-side Gergm remix starts out with a voice proclaiming "Remix, remix, remix" which sort of annoyed me. Once you get past the intro, the song retains more of the lyrics, bass throb and snare hits than the first side of mixes, but doesn't retain the sensual tension. The original demo version is nice but with less of a hard beat and more of a piano and dub sound. But it doesn't add all that much to the original released version which utilizes its unique and tense snare hits and sensual build better as heard on the Where Is Here compilation.