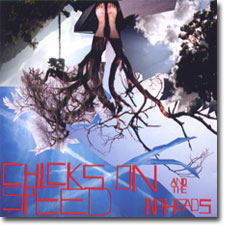 Press the Spacebar is the oddest Chicks On Speed record you've heard yet. But it works, and is way better than last year's 99 Cents LP. In fact, I like this record a lot. There are many memorable songs. You could say the new Chicks On Speed sound is 'Chicks are my Co-Pilot', as the sound on this record is closer to the guitar based NYC no wave of God Is My Co-Pilot than it is to the Electroclash sound of past COS records.

The Household Song starts off sounding like The Stray Cats. The No Heads have really contributed to the sound of this record by providing a real band to play the songs. Christina Vogel is one of the members of The No Heads. He has collaborated with COS before.

Mitte Bitte starts with a guitar riff right out of B-52s Rock Lobster, then moves into a 77 punk style track with German vocals. This is the first time the band has sung in German. The guitar riff and pace reminds me of the Ultravox song Young Savage.

Class War is a hurky-jerky track that is as rough around the edges as the band were in their un-releases days. The song talks about terrorists and the government, without specifying what country they are referring to.

Culture Vulture part two really brings home the God Is My Co-Pilot comparison. The song is dissonant, but not as jarring as GodCo usually were. Part three of the song IS as jarring as GodCo, and is a big change in sound from any COS songs of the past.

Ten Thousand Years has a bass part that reminds me of Definitive Gaze by Magazine (Howard Devoto's post-Buzzcocks band). There is a touch of prog throughout this track.

History Will Outlive Us has curses and cannot be played on the air if you are in FCC controlled areas. This is a shame, as the track is great - possibly my fave on the whole record.

The music of Madalyn Albrights Answer has a Clock DVA feel. Again, the feel is way closer to experimental music than pop, and it works.

Is Bigger Better is another of the songs I really like on this record. The vocals are sung megaphone style, but the music is good, and at the end a clear voice comes in like an announcer and completely changes the mood.

Fuzzy Nipple has a guitar riff like Black Sabbath Paranoid and keyboards like Hall of the Mountain Grill era Hawkwind.

Wax My Anus starts off with guitar kind of like Lenny Kaye in Patti Smith Group's Ain't It Strange. Despite its questionable title, Wax My Anus is my second favorite song on the record (just below History Will Outlive Us). At times the vocal sounds like Klaus Nomi when he would do the robotic thing. There is a guitar solo that sounds like classic Santana.

Hand In My Pocket starts off sounding like an indie rock song with a pathetic male vocal, but becomes one of the best songs on the disc.

After being universally panned with the 99 Cents LP, Chicks On Speed appear to be right on track with Press The Spacebar. I hope they bring The No Heads when they next come to the US!