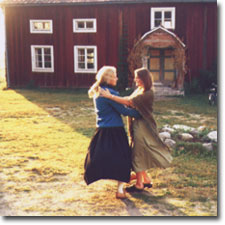 Are these guys from the sixties or are they a new band? I am still confused? After being infected by the song Panda from their 2004 release, Ta Det Lugnt, I have yet to cure this affliction. That track has these odd little pop hooks that just get you and you can't stop hearing it in your head. Dungen's latest release is their self-titled debut compiled with previously unreleased tracks. It is the ever popular "prequel".

The album just starts. Starts like you have opened the door and the band is already jamming. Sit down because these are "pieces" not songs. Only three tracks each listed containing alphabetized segements. The sound is Tangerine Dream, Gong and, the recently released Twink but never overly "prog". Flutes, guitars, piano and organ, heavy and sensitive at points, it is truly an enjoyable trip of smart "psych". This is far mellower then their second release with long interludes of quiet, melodic and jazzy "spaces". There is a personal quirkiness factor that makes Dungen's sound its own. Odd, sensual, yearning and romantic leading to infectious.

Eminatting from Sweden and fronted by Gustav Ejstes, the producer, arranger, singer and writer, all vocals are in their native Swedish. I keep frogetting that part. They sing in Swedish. Swedish hippies? It can happen. It does occur and it works. Even from the artwork and photos, this is hippie music in the truest sense of the word. This is not camp or trend. This is an homage. They are a new band, Right?