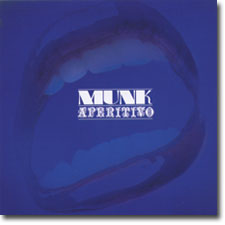 Munk are a German punk/funk duo Mathias Modica & Jonas Imbery. Mathias also runs Gomma Records. Aperitivo has guest appearances by many artists you may follow, but to use an analogy suggested by the title, it is not very filling. Only a few of the tracks provide any lasting impression.

In the Creamfields has Bobby Conn as a guest, providing lyrics, additional guitars, synth and drum machine. The song starts off with an intro that sounds like Boston More Than A Feeling. It moves into a Gary Glitter-esque drum heavy track with a psychedelic backing vocal that reminds me of The High Tides Dancing In My Mind, from WEA Records's 1982 new psychedelia compilation A Splash of Colour.

Next up is Kick Out the Chairs, which features Nancy Whang and James Murphy of LCD Soundsystem. Kick Out the Chairs was a 12inch single on Gomma in 2004. The track (obviously) uses the MC5 classic as a starting point. Due to this fact, the lyrical content will keep it off any radio shows under FCC jurisdiction. In fact, all of my favorite tracks from Aperitivo cannot be played on clean radio. Ce Kul is my favorite track on the record, and there is now way to play it. The albums other single Mein Schatzi is the other track you can't play on the air.

Disco Clown has vocals by Midnight Mike, who had several minor hits during the Electroclash era. Portofino Mosh stars The Palermo King and The Limonaden Hasen (not sure who either really are). It is a decent track about wine, but the continually repeated vocals get a little tiring. I Feel So No! has Electronicat on vocals.

Ce Kul has vocals performed by DJ Chloe. It is my favorite track musically and vocally. The music lies halfway between Pere Ubu Final Solution and The Clash This is Radio Clash.

Despite having several highlights, the album will be a disappointment to those who bought the Munk singles when they came out. The only track I find myself coming back to is Ce Kul, and possibly Ciao Dandy. The rest are either good tracks I've played to death already as singles, or half fleshed out ideas that don't sound as good on wax as they do on paper.