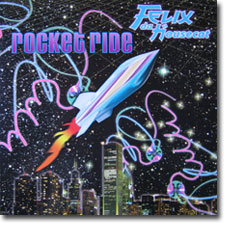 This 12inch follows a 7inch of the same song, and the Devin Dazzle & The Neon Fever LP which the track comes from.

Overusage of a single song? Not really. There are three new versions of Rocket Ride that deviate wildly from the original without taking the usual remix route of making a vocal track instrumental and extending the length.

Soulwax, the Belgian duo who release comps as 2 many dj's and hang all dj's, give Rocket Ride a completely new music bed, as they did for Ladytron on Seventeen and Playgroup on Make It Happen. I don't know what song they are using, but it works real well, and gives the familiar track a completely new feel.

Freeform 5 take away the Le Tigre feel of the original and replace it with a disco beat and a low end groove. To this they add a Gary Numan styled synth, totally transforming the song and making a strong case for the remix as valid art form

The Rude Photo rude mix is Felix's own mix of the track. To me it is the least effective, because it retains the feel of the original, and uses the time tested 'tricks' of classic remixes, such as echo and cowbell additions.

Felix Da Housecat in the gullbuy: