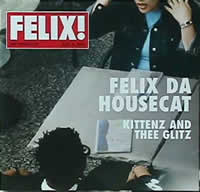 In May, I heard Chicago's Felix Da Housecat's Silver Screen Shower Scene for the first time on an Internet radio show, and I knew immediately that it was going to groundbreaking.

As Carl said in his review, it was like hearing an early single by Adult. or Chicks On Speed for the first time. There was a pounding bass, great energetic electro dance beats and Miss Kittin's sexy, infectious, deadpan vocals. It was absolutely brilliant, and instantly one of the best dance singles of the year.

It's clear that the star of Silver Screen was not Felix but Miss Kittin, a.k.a. Caroline Herve, who was born in Grenoble and now resides in Geneva. She had collaborated with The Hacker, a.k.a. Michael Amato, for two excellent E.P.s on International DeeJay Gigolo: 'Champagne' and 'Intimites.' Like Adult., the music clearly had an electro sound and the subject matter was dark in nature (just hear their diabolical, yet hilarious tribute to Frank Sinatra). The songs were aggressive and cleanly produced, yet emotional and sexy.

With a sleeve design that reminds me of Hello! magazine, faux tabloid paparazzi shots of Felix and his cast of musicians are all over the album, giving a subtle and fun commentary on celebrity-obsession. From techno and house to electro and disco, Felix is definitely crossing numerous musical boundaries on this record, and he sure does it well.

Harlot (1) is a terrific opener featuring guest vocals from Melistar. The electro-house beats have an amazing energy to them. She also appears on Happy Hour (10) and duets with Miss Kittin on What Does It Feel Like (9). Both are excellent.

If you enjoyed Silver Screen, check out the first song that Felix and Miss Kittin wrote for the album, Madame Hollywood (6), and play the track before it too, which is a short recording of Miss Kittin leaving a message on Felix's voicemail. She sounds like a cat even off-the-record! ("heyy feeliixx, it's mee, meezz keetehhnn"). The two tracks sound great together. Junior Sanchez (resident DJ at NYC's Centro-Fly) creates amazing beats for his collaboration on Control Freaq (my favorite non-Miss Kittin or Melistar track); amazing production, as well.

Electrikboy's work shines the most on Harlot (1) and Glitz Rock (12) the latter is the most electro-disco track on the album. If there's anything that sounds the most like straight-up house, it's Sequel2Sub (13). There is no heavy pounding bass, but some nice piano melodies, which was common in the late 1980's/early 90's house scene from which Felix emerged.

Track 11 is a clip of a phone interview between Felix and Tommie Sunshine. It's funny to hear if you're listening to the whole album, but I would think it sounds strange over the radio. It just doesn't work as well as the Miss Kittin voicemail clip.

*side note* For more songs by Miss Kitten, also check out Miss Kittin & the Hacker's 'The First Album,' on International DeeJay Gigolo. It's almost like a companion to Adult.'s 'Resuscitation,' and I can guarantee that you will fall in love with the infectious beats and the sexy voice of Miss Kittin, esp. after hearing 1982, Life on MTV, and Frank Sinatra. It's easy to say that 'Kittenz & Thee Glitz' and 'The First Album' are amongst the most essential electro records of the year.

Warning: there's a bonus track toward the end of track 16.