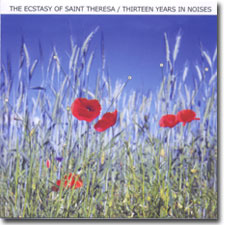 The Ecstasy of Saint Theresa have been quietly (sometimes not so quietly) releasing music for the past 13 years, and reissue label Rev-Ola out of the UK has seen fit to put together an overview compilation called Thirteen Years In Noises from the best of this Czechoslovakian group's music. Inspired from the ashes of the early 90s shoegazer movement The Ecstasy of Saint Theresa formed and developed their own brand of music over the past 10 plus years which should not go unnoticed.

Thirteen Years In Noises does an incredible job of compiling some of the best moments culled from the various releases through the years including Pigment, Sussurate, Free-D (Original Soundtrack), Fluidtrance Centauri... (Peel Sessions, in its entirety), Astrala la Vista (a remix disc), InDust3, Slowthinking, and a song from the movie Samotari.

A lot of what makes The Ecstasy of Saint Theresa great is here, from the early moments like What's and Square Wave which are inspired by My Bloody Valentine's Isn't Anything to the Free-D more Pink Floyd like sounds of Her Eyes Have It. There's even some music from albums unheard by me which send them into a more digitized pop realm. To cap things off is the inclusion of a video for Fluidum (which I couldn't get to play).

I for one could've used a little more from the Free-D (Original Soundtrack) album (only one track is featured, the amazing Her Eyes Have It), and a little less of the recent stuff, but I still think this is a great overview of a band I love.