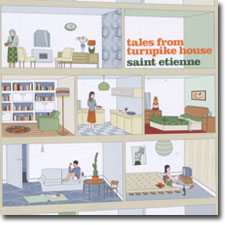 The first new Saint Etienne material in three years sees the band pull in guest appearances by artists whom may have influenced the band in their style, and gives a first taste of the children's songs that band had been rumoured to be working on.

Tony Rivers fronted two excellent bands that you must check out if you like upbeat music with postive energy and killer harmonies. Tony Rivers & The Castaways and his later band Harmony Grass were bands that I first learned about through El (Cherry Red) compilations such as Valentine 2000 and Modern Acoustic.

Tony Rivers and his son Anthony Rivers sing harmonies on most of the songs on Tales From Turnpike House. As much as I love their work (and am anxious to hear new stuff by Anthony Rivers as he gains momentum), the harmonies they provide for this record give a late 90s High Llamas feel to many of the tracks that I don't particularly enjoy.

Lightning Strikes Twice and Stars Above Us are both co-written and produced by Xenomania. Both songs are highlights on the record with upbeat feel and catchy beats. Xenomania is Brian Higgins & Matt Gray. They are producers with hot credits under their belt, including New Order, Texas, Rachel Stevens, Girls Aloud, to name a few. He has worked many times with Saint Etienne before. He producted Soft Like Me, New Thing, Shower Scene, and Action form Finisterre, Stormtrooper In Drag from the 1997 Japanese-only Continental collection, and Burnt Out Car from their 1996 remix collection Casino Classics.

Side Streets truly does sound like Luke Haine's band Black Box Recorder, though he never had Anthony and Tony Rovers backing him up! It is the best song on the record, and the band chose well when they made it the first single.

Relocate features David Essex on vocals along with Sarah. He is the guy who wrote and sang the classic track Rock On. In 2001 Howie B used the song as the basis for Duet on his Folk record.

Initial copies of this CD include a bonus disc Up the Wooden Hills. If you are going to buy this CD, you HAVE TO find the version that includes this bonus disc, as three of the six songs on it are my favorites from the whole 2xCD package.

When I looked at what other people were saying about this new record, I found the usual range of opinions, from "the best Saint Etienne record ever" to "don't buy this record so they don't put out another." But most reviews seemed to agree that the bonus disc was a throwaway you should not pay extra to receive. I sure disagree! I think You Can Count On Me, Let's Build A Zoo and Excitation are the best tracks I've heard from the band since the glorious Good Humor album. They sound like the band really enjoyed making them, which many of the tracks on the other disc don't. Disc 1 feels technical, practiced and professional. Disc 2 feels passionate.

Up the Wooden Hills could be a missing companion to such Siesta comps as Algebra Spaghetti and Simultaneous Ice Cream. It is a sampler from the children's record the band has been rumored to be creating. I really hope that they DO make that record, and that it is filed with lots of other tracks like this. I will be real disappointed if these 6 tracks make up the centerpiece of this rumored record when it is finally released. The band must realize that all their true fans (count myself as one) will own this version of Tales From Turnpike House...

At the end of many listenings in preparation for this review, Tales From Turnpike House doesn't quite grab me like other Saint Etienne albums did. If it weren't for the bonus disc Up the Wooden Hills , I would probably not return much to this record in the months to come.