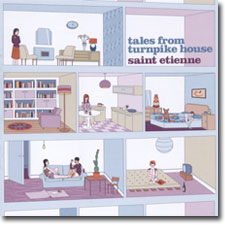 Savoy Jazz enters the popular music arena with their first non-jazz release, the US version of Tales From Turnpike House, which came out on the Sanctuary label in the UK.

In July 2005 when I reviewed the UK version of this record, I said that aside from the bonus disc of children's songs, I doubted I would be listening much to Tales From Turnpike House. Now in February 2006 I have a re-sequenced version with two songs removed and three new songs added, and I like this record very much.

A Good Thing exudes positive energy, and Stars Above Us is a disco epic. Lightning Strikes Twice has a hint of Asian Underground feel and is fantastic too.

Dream Lover is a new song. It is a vocal track with a Birdie feel. There are reverb soaked vocals richly wrapping Rhodes keyboard and flute, with wordless female backing vocals. If you wanted to define the word 'languish' you could use this song to describe the feeling without words.

Oh My is another new song. This one rocks percussively like a T Rex / Gary Glitter / David Essex hybrid. This is not the Saint Etienne you expect! The guitar honors Queen's Brian May or Boston's Tom Schotz with an effect sustain sound. The bridge in the middle may remind you on Eno's 1977 7inch Kings Lead Hat. Quite stellar!

I'm Falling is the last of the new tracks. The synth may remind you of FC Kahuna's 2002 hit Hayling. Though the track has a powerful sound, it is my least favorite of the new tracks. Sarah's vocals just don't hook me like they do on other tracks.

Missing from this version of Tales From Turnpike House are Relocate and The Birdman of EC1. Relocate was an odd track. It featured David Essex doing a crotchety duet with Sarah. The Birdman of EC1 was an instrumental that isn't missed much here.

Stars Above Us is currently my favorite Saint Etienne track, and that is saying A LOT, as I love at least a hundred of their tracks. This is the song I will put on when getting ready to go out, to get me psyched about whatever evening I have planned.

Tales From Turnpike House is a wonderful record. I really like this re-sequenced version. I give Saint Etienne a lot of credit. It is obvious that they don't just release 'product' - the fact that they gave us three new songs and otherwise completely re-invented this record speaks volumes - they care about their fans and their music is capable of growing organically.

I hope you check out this disc. Online samples can not really give you the full experience. If you like Saint Etienne, buy this disc and immerse yourself in the story it gives you. Each song ties together in an exploration of life among ordinary people living on the same block.