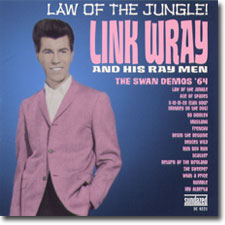 At a young age I was suckered in by Link Wray's sinister surf, psych-sound. I had no idea about genre or how old the music was. It was 1968 NYC AM radio. Listening to late night radio in the car heading back to the 'burbs of CT. I heard the Link Wray song Rumble.

In rock history there are artists that create sounds that become signature songs. A turning point is delineated in sound. Things are never to be the same again. Other artist's will take that sound and create other musical shifts. Rumble is one of those moments. In the early-sixties the world of pop was saturated with post doo-wop, teen-pop idols and English dapper-fop pop.

Wray was a standout. He was not a handsome teen idol. He had slicked back hair and a leather jacket. He wasn't The Fonz. He was tough and the sound he exhausted was blues based power chords that revved and throttled with a bitter snarl. Fred Lincoln Wray, Jr. started out in the mid-fifties with his brother Vernon (AKA: Ray Vernon) on rhythm guitar, brother Doug on drums and Wray's cousin Shorty Horton on the bass. Their musical career started with the band playing in clubs around their native Virginia. They called themselves the Lazy Pine Wranglers and then moved to D.C. and tried out the name Lucky Ray and the Palomino Ranch Gang.

Rock-a-Billy was becoming the rage in 1955. Link picked up his speed and was taking on the vocals to match his growling guitar. Wray was then stricken with tuberculosis and lost his left lung. After a year of hospitalization he returned and focused primarily on instrumental music with blues based, rock-a-Billy and distortion.

When reading interviews with many major guitar stars like Clapton, Hendrix, Townsend to the Sex Pistol's Steven Jones, Link Wray was a major influence on their careers. Wray gave them freedom. The freedom came from the song, Rumble. Marking the classic signature sound of Link Wray's career. A song that started as a dance number ordered by a DJ and early manager of The Ray Men that wanted a mid-tempo instrumental so the kids could do the Stroll. Originally entitled "Oddball" it was Link and his brother's theme song.

Their original record label, Cameo passed on the song and was picked up by Cadence Records. The Cadence sound was slick. The label was more Andy Williams and the Everly Brothers then Wray's high-distortion, high-octane roar. But the label bosses daughter liked "Oddball" and daddy released it with her newly named title, Rumble. It was #16 in the summer charts of '58. Cadence passed on all the rest of Link's efforts and sinister sounds. The band changed their name to The Ray Men (perhaps a play on the family name and the Ray-Ban sun glasses they wore) and moved to Epic Records.

In early '59 Epic released the song "Raw-Hide". A rough, whipper-snapper of a song that reached #23 in early '59. But Epic wanted them to clean up the sound to give the music a pop edge. The band wanted nothing to do with Epics request and influence. The Epic split lead to them opening their own studio in D.C. and The Ray Men lashed out with the harsh sounds of Jack the Ripper and created the aptly named Rumble Records that unleashed The Ripper on the public.

With nominal and regional success they were convinced to release the single on Swan the record label formed by Dick Clark and his American Bandstand producer Tony Mammarella. Link and Swan were together till the doors closed in 1967. They released the definitive works of Link Wray's career.

Swan let Wray and the Ray Men have the freedom to create the songs in their own studio (now a three track in the basement of brother Vernon's Maryland home), rock their own way and deliver the master recordings for Swan's office in Philly for release. There were no more A+R guys frustrating the band by trying to influence the sound to a more marketable pop product. It was just the family down in the basement having unencumbered jam sessions and laying down the tracks that would define his career and add to rock future and history. Those tracks are what make up this CD collection.

These are the master demos that Link and The Ray Men brought to Swan in 1964 for them to hear. Most of songs on the Law of the Jungle! CD eventually came out on vinyl and saw the light of day on many albums and singles for Swan. Law has a diverse and eclectic set of songs from a surprisingly touching rendition of Cole Porter's Begin the Beguine to the early rendering of Ace of Spades, soon to be another signature Wray rocker. Right out of the gate the CD rocks.

The title-song, Law of the Jungle, and Ace of Spades are Wray primeval. Rough cuts that lack the slickness with loose, bopping jam sounds. They are just kickin' the tires and seein' what these songs'll do. Jungle, the first cut, has amazing organ careening through it. The sound is chintzy and hard edged but dead on to Wray's guitar that barges in and grabs you.

Wray covers Rufus Thomas of Stax fame. Wray works out the vocals and adds a playground chant. He calls his version 5-10-15-20 (Can Your Monkey Do the Dog). Wray also gives his take on Fat's Domino's What Price. The vocals are weak but they are havin' a good ol' time. Wray scares the man himself with his version of "Bo Diddley". Mustang is more pure Wray shine.

'Stang is countrified enough for the horse rider and souped-up enough for the iron horse rider. Deuces Wild is another classic Wray solo-thon that hits the open road. Killer drumming and kick-ass soloing it unfortunately fades out when Wray gets cooking. 'Guess the tires blow out on that session.

Frenchy is a song that is fun guitar pickin' but dumb. Begin the Beguine is a well-played performance but seems out of character. After Swan folded Wray went more in this direction of less harsh, more melodic and introspective approaches.

Return to Birdland is a sweeter more sincere pop song of the era that seems like whatthe A+R men wanted him to do earlier in his career. The organ keeps a madcap edginess that keeps it from being too pop.

I recently caught the documentary, Punk: Attitude (IFC Films). Throughout the movie punk rock icons from either side of the Atlantic spoke of how Link Wray was the original punk. I had always thought the same thing. He was never a giant hit. He was far more influential than successful. He was sinister and dark in a sea of fluff and cheese. He wasn't a pre-packed image though he tried in his early days, there are photos to prove it. He looked good in the leather and stupid in a suit. Not the other way around. He punctured his amps speakers to get more distortion. The band started their own studio and record label. They had a passion for what they were doing that wasn't going to be compromised or sugar coated. That is punk.

I saw Link Wray perform seven years ago. He was in his late sixties. He put on a fantastic show. He still had it. How many sixty-year-old men still look cool, edgy and right slinging a guitar on stage in black wrap-arounds, black leatherjacket and pants?.

When Link Wray died last year in Denmark at 76 my sadness was tempered by remembering that first time I heard Rumble as a child and seeing him as an adult. Link Wray has gone on to join the legacy of many great artists that will be more recognized after they are gone than when they are with us.

For all of the artists over three decades that took his sound and rode to new horizons it is odd that Wray still hasn't received a place in the Rock-n-Roll Hall of Fame. So many that he has influenced have made it into the hall while leaving Link out. Only solidifying that it really is who does it second, third and even fourth. How can those he influenced b e mre importatnt than he who originated the sound?

The sessions contained on Law of the Jungle are not brilliant moments of Link Wray's career. It is great for a fan and devotee to hear these loose and laidback tracks. To hear songs being flushed out in their infancy or re-approaching an older song. If you are interested in discovering Link Wray for the first time you may be want to try his greatest hits collections.

But if you love Link Wray, you can slip back in time and be invited into the intimate, private moments of a great band lead by a groundbreaking guitar master in his elementas they flush out their sound, on their terms, unfettered and unencumbered by the pressures of money, fame, and management. It is just a bunch of guys jamming in the basement but never thinking that 40 years later its influence would still be felt.