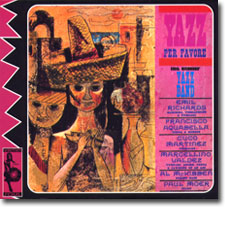 Emil Richards and group are best on a trio of songs that appear in the middle of the album called Yazz Per Favore (the title track and a self composed tune by Emil Richards), Green Dolphin Street (a classic, oft covered tune), and Friday the 13th (written by Thelonious Monk), where the percussion really takes over and Emil Richards plays the lower end of the vibes and all musicians come together almost as if they are one huge beast of latin percussion.

Other tunes that flesh out the album are two more Thelonious Monk tunes (Blue Monk and Well, You Needn't), another Emil Richards original (Oh Very Well), Half And Half (written by pianist Paul Moer), and Little Niles (written by Randy Weston). Vampi Soul has done a fine job presenting this recording in a beefy monophonic recording, though the liner notes from the original lp are recreated in the tiniest font possible (often a problem with reissues of this kind), which is not the biggest deal considering how nice the whole package looks.