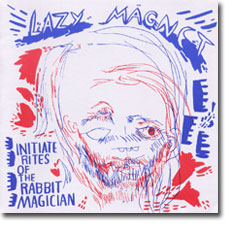 A decade ago, split EPs like this one would be coming out constantly and would fill a 'new release' section of your favorite store's 7inch section. In 2006 most stores don't even carry singles, and those that do have (for the most part) stopped the new release section, as so few singles are bought by retailers these days that such a section became a joke.

Lazy Magnet and Ren Schofield are indie rockers from Providence Rhode Island. The split EP Initiate Rites of the Rabbit Magician is a treat found while trolling through the A - Z sections of a local store.

Lazy Magnet is Jeremy Harris. His online bio compares him to Jad Fair, and that is a fair comparison. Rabbit Magicians Creation Fable is a psychedelic epic that would fit on any Elephant 6 release. You can hear early syd Barrett Pink Floyd mixed in Lou Barlow styled vocals and an Olivia Tremor Control 'everything but the kitchen sink' approach to instrumentation. Amazingly, the mid part of the song even has heavy metal chords and 70s metal style singing. Brian O Made of Snow is a short song that sounds like an old shanty.

Ren Schofield owes a debt to Lou Barlow and Sebidoh without being too close - there are many more ingredients in the 'Ren Schofield' stew than indiepop, acoustic guitars, home recording and sadness.

Toasterlessly Blue is a love song to a toaster than has gone kaput. Big O is a song to an ex-girlfriend. The lyrics have words the sting tempered by an obvious attraction for the subject of the song. Whimsical Flutterings is a short instrumental featuring a big drum freakout at the end.

The EP comes with a 28 page 7inch square booklet with 23 pages of a Jeremy Harris comic book, and 5 pages of Ren Schofield info and photos.

The last song on each side are throw-aways, but that leaves three tracks that you will want to hear, and the only place to hear them is this EP, so I say buy it if you see it.