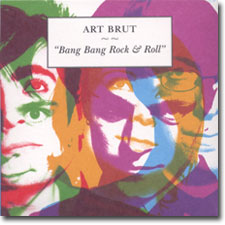 Following on after three single releases in the UK, Bang Bang Rock & Roll is the debut album from London-based five-piece Art Brut.

Four males and one female, three Britons and two Germans -- all appearing under names they weren't born with -- got together in 2003, originally for the specific purpose of fulfilling vocalist Eddie Argos' long-cherished desire to appear on the British TV show Top of the Pops. While the TV appearance hasn't happened yet, Art Brut have built up an enthusiastic and ever-growing fanbase without much mainstream media attention, mainly through their entertaining and raucous live shows, with a little help from internet word-of-mouth.

Guitarists Chris Chinchilla and Ian Catskilkin, bassist Freddie Feedback, and drummer Mike (no last name) bring a variety of influences to the group, including ska, grunge, and, uh, Weezer. Their pop-punk -- or should that be punk-pop? -- approach grabs a little from Column A for the catchy, short melodies with hooks that can get stuck on repeat in your internal jukebox, and a little from Column B for the DIY attitude that's not averse to taking a few sideswipes at the music industry itself and its attendant mainstream culture.

Art Brut's independent-minded and inclusive approach extends to the CD's packaging. The jewel-case-free cardboard folder opens out to reveal the lyrics to all the songs. It also includes a fold-out sheet and a grid, complete with "Battleship"-style coordinates, which can be colored in to recreate the band members' portraits from the front cover artwork. Fans with the patience and perseverance to complete the task are invited to scan and send in their creations, to be featured on the band's website. Art Brut are the band whose single entitled Modern Art came out on 7inch vinyl in plain white sleeves, which fans decorated with paint, markers, and glitter provided at the launch party to create their own individual "artworks."

Bang Bang Rock & Roll opens with Formed A Band, which was Art Brut's first single and has been re-recorded for the album -- unless, that is, you make a dive for the rewind button to find the hidden instrumental track, Subliminal Desire for Adventure, which usually opens Art Brut's live sets. Twenty-first-century listeners who get caught up in trying to figure out just how many layers of irony have been piled on in the exuberant chorus of "Formed a band, we formed a band, look at us, we formed a band" would be well-advised to stop looking and just listen to Formed A Band as a sincere expression of the sheer excitement of starting up a band and the anticipation of all the brilliant things that are certain to come. Surely being in a band is great fun for its own sake, so why not set your sights high and have the confidence to believe that yes, you can "write a song as universal as Happy Birthday"? And while you're at it, go ahead and write "the song that makes Israel and Palestine get along."

It is no surprise that the band who lifted their name from the genre defined by Jean Dubuffet to refer to art produced by non-professionals outside traditional, mainstream channels would show some knowledge of the serious artistic world. Modern Art, also previously released as a single and re-recorded for the album, namechecks London's Tate Gallery and the Pompidou Centre ("that's in Paris," the listener is helpfully informed), as well as British-born painter David Hockney. Its shout-along chorus of "Modern art makes me want to rock out (Wooh!)" puts into words the joy and delight of experiencing the power of great works of art, but also the pent-up emotions which perhaps some of the more easily-excitable visitors to stuffy British art galleries dare not release.

My Little Brother combines exasperation at a younger scenester sibling's efforts to appear cool with a touching, yet hilarious, warning to "Stay off the crack." Later, the title track and Bad Weekend continue the uproarious dissing of the mainstream cultural industries, including mass-market fashion and the bandwagon-driven music press.

Moving to L.A. expresses a wish to experience southern California as seen on TV. It is written from the perspective of someone who has obviously never been anywhere near there and delivered in an unmistakably southern English accent... with added "neeeeeoooowww" airplane noise and surf-pop backing harmonies.

Several tracks on Bang Bang Rock & Roll handle the perennial pop-music subject of young love, too, but with characteristically offbeat wit and loads of charm. Good Weekend sees the band getting just as excited about having a new girlfriend as they were about forming a band. Who wouldn't want to rush out and shout, "I've seen her naked TWICE!" in the initial thrill of a new relationship? Emily Kane, another previous single, is addressed to an ex-girlfriend of the teenage Eddie Argos (possibly before he even was Eddie Argos). As has been well publicized by now, yes, Emily Kane is real. And as testament to the worthwhile nature of putting your heart on your sleeve for all the world to see, yes, she did get in touch. Emily Kane is sure to strike a chord with anyone who's ever pined for a lost love longer than is strictly reasonable or healthy, and fortunately, her name is also easy to rhyme.

Paradoxically, by expressing his most personal experiences in his lyrics, Eddie Argos may just have hit upon some of those universal themes -- at least for half the world's population (or so I've been told). For example, with its insistent refrain of "I know I can I know I can" chugging away in the background but then, tragically, giving way to wails of "Don't tell your friends! I promise it won't happen again," Rusted Guns of Milan is a clearly heartfelt song about the delicate matter of erectile dysfunction.

Less accessible are the songs like Stand Down and 18,000 Lire which make references to the Gatti Gang, a particularly incompetent cell of the Italian Red Brigade terrorists, about whom even Google seems to know very little. And Fight, with its recreation of a drunken dialogue between two people itching for an argument, would benefit from more variation in the vocals to disambiguate the voices baiting each other.

Overall, the feel of Bang Bang Rock & Roll is more restrained and subdued than Art Brut's live shows, which are exciting displays of exuberant energy and personality. Even so, the album is more clever, entertaining, and original than most of the rest of what's currently being tagged with the "art rock" label.

Eddie Argos' half-spoken, half-shouted delivery may not be to everyone's taste, and listeners accustomed to slicker production techniques may bristle at the mushy S's in the vocals or the occasionally ragged instrumental technique.

But to get hung up on these shortcomings in technique or production is to miss the point. Bang Bang Rock & Roll is the result of a group of people with masses of imagination, wit, and heart doing what they want to do, and having a good time doing it. And if you don't like their songs, well, you can always pick up a guitar and form your own band. What's stopping you?