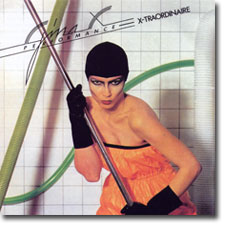 Gina X Performance (Gina Kikoine and Zeus B. Held, who also produced John Foxx, Dead or Alive, Nina Hagen, Die Krupps, Transvision Vamp) from Cologne switched things up a bit on X-traordinaire, their 2nd album from 1980 (recently reissued on LTM). By adding more instrumentation to the simple but effective mix they used on their debut album, Nice Mover (also reissued by LTM and reviewed last week), with songs that aren't as sharp or tight as those on the debut either, Gina X Performance offer up a fine but flawed 2nd album. X-traordinaire keeps the same deadpan style but with a crunchier, fuller sound and a rushed performance, it became more of a footnote to the greatness found on their debut.

There are a few great moments on X-traordinaire. Striptease has a Euro sexiness and a circus atmosphere which many Euro popsters have since tried to emulate. Do It Yourself was a club hit back during its release and is the most like the debut album with its pulsing rhythm. It's only the added guitars which show the change, and add hints of cheese to an otherwise sweet track that probably could've been improved with a few more takes. Nowhere Wolf has some haunting wolf sounds (or silly, if you think wolf sounds in music is funny). Ciao Caruso ends the album proper, with a 10 minute dub workout which actually is a fine ending to this album.

The bonus tracks on this edition include a 7" edit of Do It Yourself which adds more emphasis on the guitar rather than the pulsing beat which was probably not a good idea. Waiting and Kanal Banal are both from the Gina X album Yinglish from 1984 and have a more ethereal mid 80s sound to them. The emphasis back on the electronics was probably a good move and these tracks have a lot to offer. Hypnosis/Hypnose is from the 3rd Gina X Performance album Voyeur from 1981 which was a hit in France and has some cool dual vocals by Gina X.

Gina X Performance in the gullbuy: