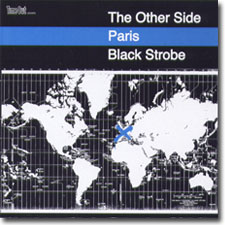 Black Strobe (Ivan Smagghe and Arnaud Rebotini) have been given the chance to represent their city of Paris by being featured on Time Out Magazine's new series of city spotlight dual disc compilations called The Other Side. Other cities spotlighted in this series include London (Damian Lazarus), and New York (Fischerspooner). Each compilation in the series includes a dj mix and a dvd with the dj giving a tour of hip underground spots in each city.

If you know Black Strobe or previous Ivan Smagghe mix cds, then you know what you are in for. But if you're expecting the loungey side of Paris then be forewarned. This is a dark industrial ride into the seamy side of Parisian techno. Hard beats, distorted vocals and pulsing techno synths set you up for a sleazy stay in Paris.

Black Strobe intersperse a few of their own tracks in the mix including a 5 minute intro track, Abwehr Disco (the b-side to Chemical Sweet Girl), which is a track perfectly well suited for a mixed DJ set of hard beats, and Deceive / Play which was a 12 inch released on Black Strobe's own label in 2005. Usually it's cheesey to include your own music so much on a mix but in this case each Black Strobe track works perfectly where it is in the mix. Abwehr Disco and Deceive/Play come at the end of the mix but it's worth holding out to the end to check them out.

After the Black Strobe intro, there is This Is Sick by Solid Groove which sets the pace for the first few tracks, including the Märtini Brös' Darkroom, Hell's Jack Your Body and an instrumental version of Operating Tracks by Front 242 from 1982. These are all hard jacking techno tracks which will move bodies fast in dark places.

The Front 242 works itself into the odd track in this mix, though a great track it is, Terror Couple Kill Colonel by Bauhaus. A refreshing change of pace though for a mix so full of dark techno rhythms.

Things get back into the rhythms with DS's Like It, Like That, but with a more laidback funky techno sound, leading into The Sun God's Return 2 Saturn, Midfield General's Error Dub (briefly), and finally Basteroid's Schicking Data Per Post where the rhythm picks up again. This was my least favorite part of the mix - until Boys Noize's Volta 82 comes on and sets up the end of the mix nicely, leading to Trentemøller's Beta Boy, Mickey Oliver's Intensity, the two Black Strobe tracks at the end and Huntemann's 50.1.

Black Strobe in the gullbuy: