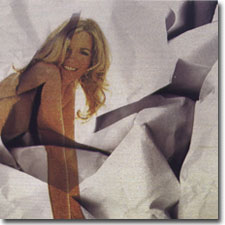 There are DJs for DJs and then there are the DJS that combine the art of DJing with real live bands. The former tend to offer up beats for the head, while the latter type of DJ tends to offer up a DJ experience that combines the beats with the more popular art of song.

James F!@#$%^ Friedman does a fine job at the latter, combining the art of the DJ with the art of the song, by including known artists like Annie, Bloc Party and Out Hud in remixes with lesser known artists that Friedman champions like Tom Vek and David Gilmour Girls. Starting out in the rave scene, then moving onto the party scene, Friedman stays away from the elitist DJ sound nicely, while aiming to please the partygoers' ear. Go Commando is the first in a series of DJ mixes from Defend Music.

Things start out well with the candy pop electronic music of Annie's Me Plus One as remixed by the Rapture/Hushhush. Annie seems to be the only female singer doing this blend of electronic music and pop these days and each of her releases is so addicting.

Franz & Shape get some help from electro producer god GD Luxxe (Gerhard Potuznik) on a bass heavy dub version of This Is The Way with gleaming synths.

The Rapture/Hushhush remix of Who Made Who's Space for Rent is all over the place (also being featured on Gommagang 3) and is one of my least favorite moments on this mix because of the vocal style.

Tomboy (a member of Who Made Who) works much better with his track Maggie & Samira and gets things back on track with thick bass and pulsing synths that breakdown into rhythm workouts.

The Black Strobe mix of Bloc Party's Like Eating Glass sends the mix into a darker electronic territory with mutated vocals and dark synth.

Freeform Five's Eeeeaaooww gets the disc into a party mode. This track was recently reworked with dancehall DJ singing but this version has just backing vocals singing "Eeeeaaooww" and works better for a mix cd this way I think.

Photocall has a electro boogie type of beat and some computerized vocals mixed with female vocal for a sweet track taken from their Computer Life Recordings 12 inch.

David Gilmour Girls are Jasper Uhl & Robin Van Der Kaa and their Skelter Skelter is the b-side to their Heavy Metal Music Magazines 12 inch on Relish Records. They combine indie guitars into a bassled music for a more psychedelic take on the sound. For those who miss guitars in electronic music this may be a band to watch.

Out Hud bring us back to the female led vocal electronic pop with It's For You. This leads well into the rhythmic slice of Eskimo Recordings artist Ray Mang, whose collaboration with Foolish Felix (Felix Dickinson) on a dub version of Who Said? that centers attention on drums soloing and heavy bass.

Tom Vek's indie vocal works well at this point in the mix on his Nothing but Green Lights.

The compilation ends with the Fulci inspired dark electronics of Zombi's Sapphire, which could be a theme song from a lost zombie film with its pulsing cinematic dark synths.