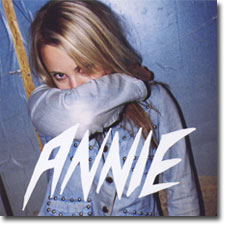 Ann Berge-Strand has been recording in Norway as Annie since 1999, when the Greatest Hit 12inch was released. The song has appeared on many compilations since, including WMF's Audio.Video.Disco.

Sadly, Greatest Hit was to be the only song she would record until recently. Her music and life partner Tore Korknes passed away from heart problems in 2001.

After a 55 second intro/build up, the album proper starts off with Chewing Gum, which you either already know (give yourself a gold star) or need to hear soon. Chewing Gum is ultra-catchy, and still sounds pretty good after all the times I've heard it. Even nicer, they gave us the Mylo mix instead of the standard version.

Both Chewing Gum and Me Plus One were co-written by Richard X. He is a great collaborator for her. Me Plus One sounds like later Human League / early Heaven 17. In 2003 Annie appeared on Richard X presents his X-Factor, singing the song Just Friends.

The second single from Anniemal is Heartbeat. Heartbeat has smooth vocals like Regina Jannsen in the band Donna Regina. The song sounds a bit like classic Saint Etienne. In fact, Annie is opening up for Saint Etienne on their upcoming tour.

I have only ONE gripe with this record. My favorite track No Easy Love is mastered poorly. The high end is too loud in the mix, and the backing music has an audible high-end distortion. Still, the song has a lazy disco shuffle akin to Style Council's stellar Long Hot Summer and is a real jewel.

There is a new version of Greatest Hit. Though I would have loved the original to be a bonus track (even a hidden one - I don't care), I was glad that they gave us a completely new version to latch onto. Greatest Hit is pure disco, and was originally recorded way before the current vogue of that sound. The new version includes a sample of the Madonna track Everybody.

Heartbeat, No Easy Love, and My Best Friend were produced by Röyksopp's Torbjørn Brundtland.

Intro, Always Too Late, Helpless Fool for Love, Anniemal, Happy Without You and Come Together were co-written by Op:l Bastard's Timo Kaukolampi. I loved Op:l Bastards, and am very glad to hear his work on this Annie disc.

I really like this record. If you wanted to be cynical you could say it is a poor man's Saint Etienne, or an update of Dot Allison, but if you keep on listening, you will come to love these tracks without comparisons or baggage.