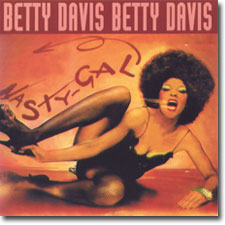 Nasty Gal was the third album from Betty Davis. It came out in 1975 and was her first full length for Island Records, following a 7inch she did for Island.

Betty Mabry married Miles Davis in 1968 and divorced him a year later. there were rumors of an affair with Jimi Hendrix. After her divorce at 24 she returned to her original career as a model. She kept the Davis last name.

Like her other two records, Nasty Gal is a disc that is hard to dislike. The record has dirty funk with a hard rock edge. In a way she was a funk counterpart to Jim Dandy and his hard rock band Black Oak Arkansas. Both bands are completely over-the-top, and both bands have remained under the radar of the 70s revival microscope.

If you enjoy watch Blaxplotation films and like street talkin' toughies like the gal on the motorcycle who says "your name is MUD" as she rescues Charlton Heston from the night creatures of The Omega Man (a 1971 Hollywood adaptation of Richard Matheson's classic book I Am Legend), you will love all three Betty Davis records.

If you own all three of the records, you can go one step further by tracking down the 1996 Razor & Tie CD 'Crashin' From Passion,' or the 1999 Charly CD 'Hangin' Out In Hollywood,' both of which collect Betty Davis tracks from her attempted comeback in 1979. While nothing on these discs stand up to the three original records, you will want to own them if you can find them.

Betty Davis in the gullbuy: