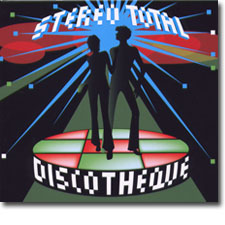 Discotheque is a collection of remixes and covers that have been hard-to-find and were never on CD. It is not a 'remix project' - everything on this disc is top-quality first run material.

Thieves Like Us (a new electronic band from Berlin) do a remix of the (nearly unrecognizable) Stereo Total version of the classic Nico song Chelsea Girls.

But the best cover of all is the Stereo Total version of Rolling Stones' Mother's Little Helper. It shares the same music as Europa Neurotisch, which comes first and blends right into it.

Tracks 10 through 13 were from the Do the Bambi Remixes 12inch which came out in 2004 on Disko B. There are three versions of Das erste Mal, but you would not know it (they are quite different) and each of the versions are worthwhile.

This CD works well as a set and has a lot of good tracks on it. I recommend it!

Stereo Total in the gullbuy: