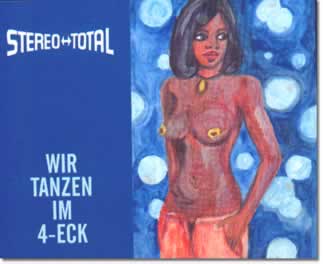 The art of putting together a CD5/12inch single is one of frustration for fans. In CD format the dreaded CD1 and CD2 sets plague fans with the need to buy 2 versions of a single for the one or two songs unique to each. Now that Stereo Total have international fame and have the power of Virgin Records behind them (Bungalow is a Virgin subsidiary now) you might expect that they would fall prey to such tricks. I am pleased to say that this CD5 and 12inch single does not.

There are less than 2 minutes of material that we have heard before (the 1:58 original version of 'Wir Tanzen Im 4-Eck'). The single contains remixes from Christopher Just, Bis, Felix Kubin, and Candie Hank. It is the second single taken from their latest album Musique Automatique, released on Bungalow/Virgin in Europe, Cherry Red in the UK, Bobsled in North America, and Avex in Japan. Each of the mixes completely change the original, and are not simply instrumental techno mixes.

Christopher Just (who produced Chicks On Speed on several cuts including 'Glamour Girls') spins gold into the track. This is the version I would play to someone who had never heard the song. In the same way that Carl Craig brought out the best in Adult with his 'Hand To Phone' remix, Christopher Just does not change the song, he just enhances it. He makes Stereo Total sound a bit like Andreas Dorau, which is always a good thing. The sound of his remix is bubbly, with a Giorgio Moroder pulse and a 'skip to it' pace.

Felix Kubin makes the song sound a bit more 'happy robot' than the other versions. He has a distinctive sound on his own releases, and he brings that sound to Stereo Total with his mix, which is more lo-fi than the others here.

Candie Hank is Patric Catani of the Berlin label Audio Chocolate. Candie Hank's mix sounds like something that might have come out on the Austrian label Cheap Entertainment. It has sharp edges and a haunted carnival atmosphere. It is my second favorite mix on the single.

Bis prove that they take their electropop seriously with their remix. Trouble is, there is nothing unique or distinctive in their treatment of the song. They make 'Wir Tanzen IM 4-Eck' sound like some variation of a Heaven 17 song with submarine sounds. It doesn't help that the Bis remix is the longest of the bunch at 5:45.

The only disappointment I have (aside from the Bis remix) is that Stereo Total left the Brezel Göring remix off the CD version! It is only on the 12inch, so I advise you to buy the 12inch and let your turntable sing.